[TRADING PLACES] Young people are the key in Japan-Korea relations

[TRADING PLACES] Young people are the key in Japan-Korea relations 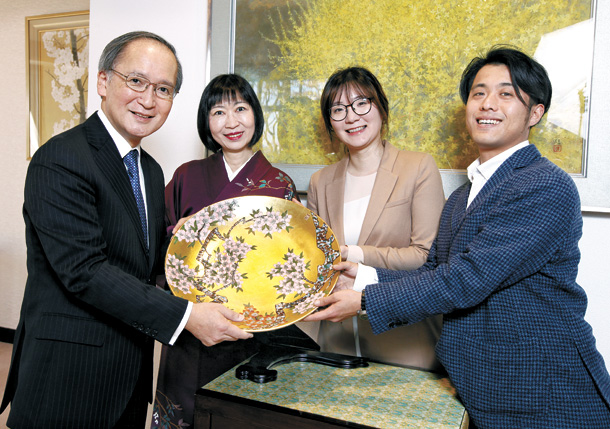 From left, Japanese Ambassador to Korea Nagamine Yasumasa; his spouse Nagamine Ayako; Kwon Joo-hyun, who spent three years in Niseko, Hokkaido, and worked in the local government’s tourism department; and Yuki Asahina, a Ph.D. candidate at the University of Hawaii visiting Seoul for his research on young Japanese and Koreans, at the ambassador’s residence in central Seoul on Dec. 26. [PARK SANG-MOON]

The PyeongChang Winter Olympics, just preceding the Tokyo Summer Olympics, may be a bridge for the young people of the two neighboring countries.

Nagamine Yasumasa: High school students from Japan and Korea got together in a camp at the site of the Winter Olympics in Pyeongchang County, Gangwon, last year. There are lots of ties between the two countries - between sister cities and between universities. I hope that more young adults from the two countries will utilize these opportunities to visit each other’s homelands. And I hope Korea, as the host country of the Winter Olympics this time, will have an active campaign for welcoming foreign visitors.

Stereotypes about a country and its people can hold one back from friendship across the borders. Kwon Joo-hyun and Yuki Asahina spoke about their experiences in breaking these boundaries and stereotypes through their stays in Japan and Korea.

Kwon Joo-hyun: I participated in the Korea-China-Japan Youth Friendship Meeting in 2009 and 2011 as a member of the staff. It was interesting to see how young people from the three countries became friends.

Yuki Asahina: Today, Korea and Japan appear to be very close and distant at the same time. Japanese young people are fascinated by Korean culture. I know some Japanese teenagers who know much more about Korea than a Ph.D. student who studies Korea, like me, because of their devotion to K-pop groups. I was also surprised by the amount of knowledge young Korean people have about Japan. In the realm of communication through contemporary culture, Japan and Korea are closer than ever. I think this is very important. If more young Japanese and Korean people become interested in each other through K-pop or manga or something else, and actually have chances to visit each country, I believe that has huge implications for the future relationship of Korea and Japan.

Yuki: I also noticed that Korean and Japanese young people are likely to become friends if they meet in a country that is neither Korea nor Japan. When young people from East Asia meet overseas, they talk about how their experiences and challenges are similar rather than talking about how they are different. I think this has an important implication. While talks about politics are important, they are not a good way to start the friendship. Hence, I think cultural exchanges at the high school or college levels are very important and preferably it should not be conflated too much with the current political debates. I hope it will bolster the more committed activities such as the Korea-Japan student forum and facilitate the ground on which we can talk about difficult political problems.

Nagamine: I have met quite a number of Japanese and Korean students during my stay here, and you find that among the people who have experienced a foreign country, they no longer hold certain stereotypes about that country. In November, I gave a lecture at Suncheon National University in South Jeolla about Japan-Korea relations. I told them that the bilateral relations should not be shaped by the governments and officials only, but that the young adults of the two countries should take charge in shaping the relations.

Left: Kwon Joo-hyun at a local celebration in Niseko, Hokkaido, in 2012, with the mascot for a local region in Hokkaido. Right: Yuki Asahina, standing on the right side with a blue hat on, at a gathering of Korean and Japanese students and professionals in Sinchon-dong, western Seoul, last year. [KWON JOO-HYUN, YUKI ASAHINA]

Kwon: I was volunteering once as a staff member for a Korean and Japanese speech contest hosted by Japan Exchange and Teaching Programme Alumni Association. In this contest, Japanese participants would make their speech in Korean and Koreans in Japanese. One of the participants was a high school student whose mother is Korean and father is Japanese. She was born and raised in Korea and her mother tongue was Korean. She said she started to learn Japanese in high school and participated in the contest using Japanese.

Kwon: She broke my stereotype that a person’s nationality would define that person’s mother tongue. Japanese-Koreans and Korean-Japanese are the ones who can make the cultures of Japan and Korea more varied. I believe that social variety would increase the people’s acceptance of differences and understanding of others.

Nagamine: The Japanese-Koreans and Korean-Japanese understand both worlds and they have played an important role as a bridge between the countries. I know many who have been working very hard in different regions of Japan to boost the bilateral relations through people-to-people meetings on the civic level. There are tens of thousands of Japanese in Korea who are also giving their best every day to strengthen the bilateral ties in the corporations and schools here. They are a critical force holding up the bilateral relations together.

Yuki: For my academic research here, I met a number of young people who are Koreans by nationality but grew up in Japan, or Japanese by nationality but have been studying or working in Korea. In some senses, they live as outsiders of both societies, but these experiences gave them deep insights about both worlds. Seeing things from both sides, they understand why some problems between Korea and Japan appear to be so intractable. Typically, I found that they have a strong desire to contribute to building a better relationship between the two Koreas and Japan because they are the ones who will be in trouble if the relations between Japan and the two Koreas worsen. I believe their experiences are integral in making a better relationship between the two Koreas and Japan.

Job anxiety and the future

Yuki’s research in Korea focuses on the socioeconomic realities young Japanese and Koreans face. Although they may face similar economic circumstances, he said, he found something different in the way young people respond in the two nations.

Yuki: Despite more or less similar levels of economic inequality, young Koreans seem to be more aware of inequalities and feel more anxious than their Japanese counterparts. In other words, they face similar socioeconomic challenges, but their responses are different. I am interested in the factors that produce such differences in the subjective understanding of their socioeconomic situations.

Yuki: Based on the research I have conducted so far, there are two major streams of explanations. One is institutional differences between the two societies. For example, the systems of labor, housing and education markets are different, and that makes young Koreans feel more insecure than their peers in Japan.

Yuki: Another and perhaps more interesting explanation is related to culture. Koreans have a stronger egalitarian orientation than Japanese. It frustrates them when they confront a reality that conflicts with their beliefs. Furthermore, because of the destruction of the elite groups during Japan’s colonization, and the wars that followed, the Korean stratification system has a different character from that of Japan, in which people are more likely to hold the idea that “you and I are the same people.” Therefore, they tend to compare themselves with others constantly. Japanese, on the other hand, accept inequality as a natural thing and thus are not stressed in the same ways Koreans are.

Kwon: Media outlets recently compared the socioeconomic realities for young adults in Korea and Japan. Regarding the insecurity about their future in an aging society, young Koreans and Japanese shared similar feelings. However, in my opinion, young Japanese seem to pursue what they want to do rather than what other people think is good. Of course, there is a social class or prejudice involved in the job market in Japan, but I think that it is less severe than in Korea.

Nagamine: Japan and Korea have many similarities across its economic and social structures and so the two countries face similar problems, like aging society, welfare and education issues and the problems with the rate of suicide as well. The employment rate seems to be improving in Japan for now, while the youth unemployment rate in Korea appears to be quite serious still.

But based on the experience that Japan has had, the ambassador tentatively projected that the youth unemployment rate in Korea may drop in the next five to 10 years.

Nagamine: With the low birthrate Japan has been experiencing for years, there was an absolute decline of young labor force in Japan. With this change in the demand and supply of labor force, the employment situation improved in favor of the young applicants. But here in Korea, the population is now declining, so maybe in five or 10 years’ time, the supply and demand situation may change here, too. If Korea is to follow our path in this sense, then it would have a better employment situation in five or 10 years’ time.

Nagamine: At this moment, there may be opportunities for Korean students to apply for Japanese companies. And I know that many Japanese companies have been holding sessions here to explain what kind of candidates they are looking for. The increase of human exchanges in the job market will be yet another bridge for the two countries. I think a solution lies within the exchanges of ideas and experiences between the young adults of the two countries - when they get together and discuss the socioeconomic problems equally faced by the two countries, this can really be a force that brings the two nations forward together.

Ambassador Nagamine Yasumasa began his tenure in Korea in July 2016. He was previously the deputy minister for foreign affairs and ambassador to the Netherlands, consul general of Japan in San Francisco, director general of the Legal Affairs Bureau of the Japanese Foreign Ministry, and minister at the embassies in the U.K. and India. His favorite pastime activities in Seoul include traveling. Ambassador Nagamine’s wife Nagamine Ayako received her BA and MA degrees from the Sacred Heart Women’s University in Tokyo and her favorite activities in Seoul include volunteer work at schools.

Yuki Asahina has been living in Korea since last year when he came to study sociology at Chung-Ang University in southern Seoul, in conjunction with his Ph.D. studies in sociology at the University of Hawaii at Manoa. Yuki chose his research topic by what spoke close to his heart: the socioeconomic realities and anxieties of young Japanese and Koreans in their 20s and 30s.

Kwon Joo-hyun is in her second year pursuing a master’s degree in political science at Yonsei University in western Seoul. Upon graduating from college, she participated in the Japan Exchange and Teaching Programme in Niseko, Hokkaido, in 2012, and worked in the local government of Niseko for three years, in the department of tourism and environment. Her favorite times in Niseko, she recalls, were often at the homes of locals she befriended during her stay there. She now hosts them in Seoul whenever they visit, she says.