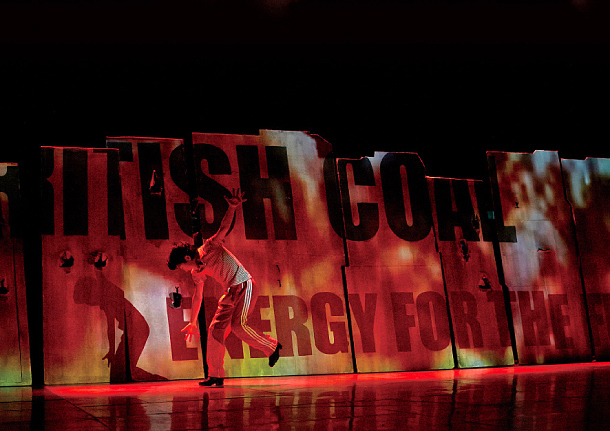 Five boys have been cast to play the role of Billy Elliot in the Korean production of the popular musical, which came back to Seoul seven years after it first premiered. [SEENSEE COMPANY]

In December, the Korean production of the popular Tony-winning West End musical “Billy Elliot” kicked off at the D-Cube Arts Center in Sindorim, western Seoul, and the musical continues to sell out weekly. Korean musical aficionados say they’ve watched the show at least five times to see all five Billys who have been cast for the production. The show has also been attracting young Korean boys to the theater who’ve never been to a musical before. “Billy Elliot” may be the hit musical that many Koreans have been waiting for.

Based on the 2000 film of the same name, the story is set in 1984 when northeastern England went through a community strife caused by the U.K. miners’ strike. Although it’s an unfamiliar setting for many Koreans, its music, which is by Elton John and Lee Hall, won the attention of Korean musicalgoers. But above all, the three-hour show full of Billy’s passionate singing, tap dancing and pirouetting has brought out standing ovations at the end of the show. The five boys - Chun Woo-jin, Sung Ji-hwan, Eric Taylor, Sim Hyun-seo and Kim Hyun-jun - who have been cast to alternate the role of Billy, had never been professionally trained as dancers before the show, and that is what fans are most amazed by.

It may seem difficult to train young boys who have never been on stage to dance and sing in just 18 months or so, but the musical’s two choreographers Damian Jackson and Nicola Belcher, who handpicked the boys through auditions, say that it is much easier to train boys who are a blank canvas.

“Only a couple of the boys came to us with ballet or tap dance experience, but basically, they were each a blank canvas,” said Jackson. “But we were amazed by the Korean work ethic. It’s just second to none and you could also see it in these Korean boys.”

“It’s better when they are blank,” added Belcher. “When they already have some sort of training, it’s difficult to change the way they are in certain areas to make them what we want, or more correctly, what the show requires. I had a boy once who I was training in London and his teacher had already taught him a number from the show. But she hadn’t reversed it, so therefore, she had taught him the dance in the wrong direction. So I had to teach him again in the right direction and it was so hard to get him out of the habit of going the wrong way.”

When asked about how the boys were like during the training process, the two choreographers described each of them in such a detail, as if they were speaking of their own children.

“Eric is a boy that came to us with a weak posture,” said Jackson. “But he is a hard worker and is purely a focused child. He would drive himself to make it work for him.”

“I guess that goes for all five boys,” Belcher added. “They want to be the best, which is the only thing you can ask for with any child. Billy Elliot is such a huge role and it is very difficult to master the singing and dancing in a limited amount of time so that kind of attitude is always great. Going on to our second boy Hyun-jun, he didn’t come to us with any particular skill. But he’s a very strong boy and the oldest of the five as well, so [his] body development was very different to the younger boys. He was absolutely determined from the moment he started training that he was going to do the best he could do and I think he succeeded.” 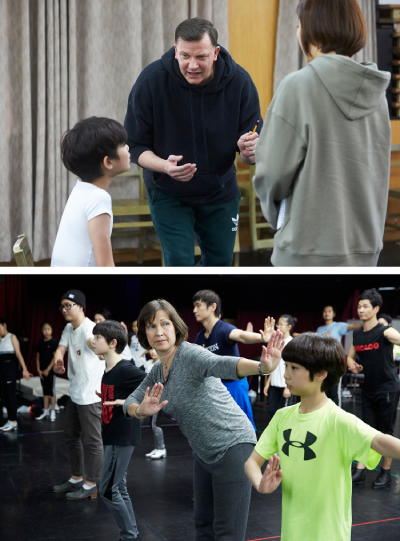 Damian Jackson, top, and Nicola Belcher, above, the two associate choreographers of the musical “Billy Elliot,” trained the boys for 18 months so that they could successfully pull off the variety of genres of dance that appear in the show. [SEENSEE COMPANY]

“He comes to the rehearsals almost with his eyes closed and seemed to be asleep during the trainings, but as soon as the rehearsals begin, or anything that’s of importance to him and the show, he’d kick right into that work mode,” he said.

“Our fourth boy Ji-hwan,” continued Belcher, “came to us with taekwondo as his main strength. Therefore, one of the things that stood out immediately was the fire in him. He had a lot of fire and a lot of character within his body.”

“Lastly, our Woo-jin. He’s a boy that wants to be perfect. He’s a perfectionist. Sometimes he goes against himself because, if something goes wrong, he will hang on to that and his brain can’t switch off from the fact that he’s done something, even if it’s slightly wrong. He’s a worry wort,” Jackson said.

Adult audience members tend to watch the show like a parent, hoping that the young Billy successfully lands after a jump or not fall after multiple pirouettes. But the two choreographers say that’s nothing to worry about.

“They are mentally trained as well so that they can handle the emotion of being on stage,” said Belcher. “They’ve shown their best for the shows so far and I see audience members standing up instantly when the first bow happens. We thought the boys may not be able to handle the emotions, but they handled it very calmly. Obviously, the show itself is about a boy who doesn’t fall part.”