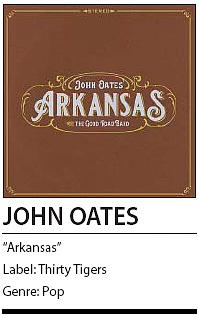 The less celebrated half of the pop duo Hall & Oates has tapped into a rich vein of American roots music on his latest offering, an album that demonstrates his seriousness about music-making.

No, “Arkansas’’ probably won’t let John Oates live down a legacy in which the mere mention of a song title can leave its melody rattling around your head for hours. The duo, during its heyday, combined a string of catchy-to-cloying singles (“Private Eyes’’) with soulful ballads that held up better over time (“Sara Smile’’).

But Oates, a Philadelphia native, has lately been exploring sounds in and around Nashville. His search led him to “Arkansas,’’ a project that began as a tribute to Mississippi John Hurt and evolved into an exploration of traditional themes.

Oates describes the result as “Dixieland dipped in bluegrass and salted with Delta blues.’’ He smartly enlisted A-list Nashville players to help, including mandolin wizard Sam Bush and guitarist Guthrie Trapp. Their playing on songs by Jimmie Rodgers, Hurt, Blind Blake and other legends elevates them considerably, and the Oates originals mixed in are good fits.