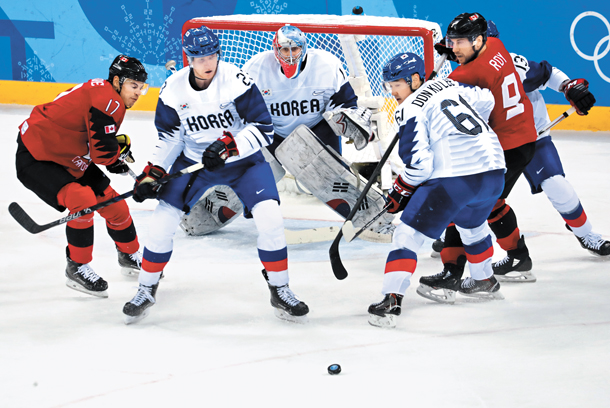 The Korean men’s ice hockey team, in white and blue, compete for a puck during a Group A preliminary round game against Canada at Gangneung Hockey Centre in Gangwon on Sunday. [YONHAP]

After losing all three preliminary games in men’s hockey at the PyeongChang Winter Olympics, Korea will now face a do-or-die match against Finland in the qualification playoffs, with a quarterfinal berth at stake.

The players have said they know they have an uphill battle against the team that beat them two months ago.

Korea, No. 21 in the world, suffered a 0-4 loss against world No. 1 Canada on Sunday. It came on the heels of a 1-2 loss to the Czech Republic and a 0-8 drubbing at the hands of Switzerland.

Korea most recently faced Finland, world No. 4, at the Channel One Cup in Moscow in December. Korea scored the first goal of the game but then gave up four goals to lose 1-4.

On Finland’s 25-man roster at the Olympics, 11 were in the lineup against Korea then.

“They’re powerful. They take the puck to the net. They’re extremely physical,” he said. “We’ve got to use our speed against them and find open holes on the ice.”

Korea was the worst team in the 12-nation Olympic tournament during the preliminary round. It was the only team that failed to grab a point, and it scored just four while giving up 13.

Forward Brock Radunske says Korea has to find ways to put the puck in the back of net.

“Obviously, scoring at this level is a little bit different,” he said. “Any team we play right now is going to be a hard game. We played [Finland] once in December so we have an idea what they’re like. They’re fast and physical. it’s going to be another hard game.”

From the preliminary round, only the top teams from each of the three groups and the best second-seeded team advanced directly to the quarterfinals.

The eight other teams, including Korea, were tossed into the qualification playoffs, and the winners will also make the final eight.

Those eight teams were seeded in order of their position in their respective group, with the goal difference and goals scored being tiebreakers. Finland was the top team among those eight.

Finland fell 3-1 to third-ranked Sweden on Sunday, its first loss of the competition. Finland had earlier defeated Germany 5-2 and Norway 5-1.

When informed after the Canada game that Korea would face Finland next, captain Park Woo-sang said, “Well, they’re one of the best in the world. We’ve just got to do the best we can.”

“They’re a good team, but those guys are human, too,” Lee said. “I am sure they have their weaknesses. We have to exploit those.”