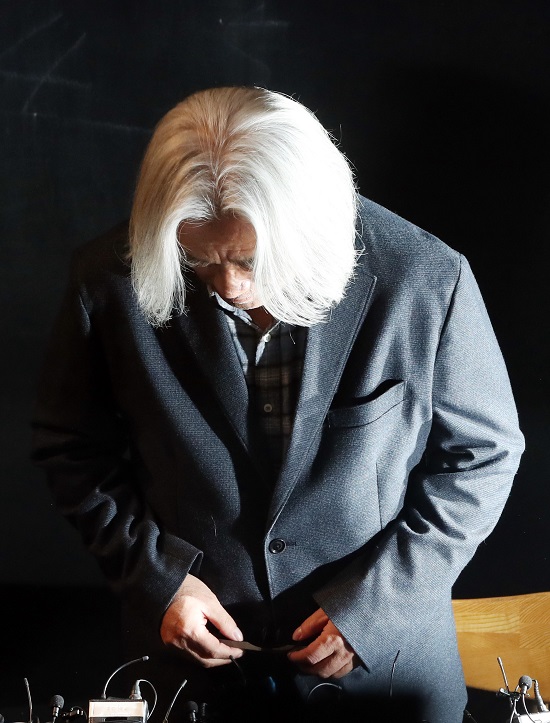 Play director and writer Lee Youn-taek makes his public apology regarding the recent accusations on his sexual misconduct in a press conference on Monday morning in 30Studio, central Seoul. [KIM KYUNG-ROK]

Lee Youn-taek, a 66-year-old playwright and producer, gave a formal apology on Monday morning in response to the recent sexual abuse accusations brought against him by several women.

On Feb. 13, allegations surfaced that the renowned writer had sexually assaulted a female actor in 2015 while working with the National Theatre Company of Korea.

The news was then followed by numerous accounts of women from the theater world who claimed that Lee had sexually exploited them. On Feb. 14, actor Kim Su-hee posted on Facebook that she was forced to “give [Lee] a massage near his genitals”; an anonymous internet post on Saturday was written by a user who claimed that she was raped twice by Lee; and a post on Facebook by actor Lee Seung-bi on Monday morning stated she was also groped by Lee some years ago.

Lee, after resigning from all his positions in the theater world on Sunday, made an appearance in front of local press in Jongno, central Seoul.

“I give my sincere apologies to everyone who has been hurt [by me],” said Lee. “This was a horrible misdeed that has been habitually performed over the last 18 years. Sometimes I did it without knowing that it was wrong, and sometimes I felt guilty, but I could not hold in my filthy desires.”

After the writer gave his apology, revealing that he is willing to take all moral and legal responsibilities, Kim So-hee, the incumbent president of the Street Theatre Troupe (STT) -- which was founded by Lee in 1986 -- announced that she will disband the troupe.

“We have heeded the voices of the victims over the last three days, and have decided that this isn’t something we can solve with just our efforts,” said Kim in the press conference after Lee’s apology.