Seoul preps for Ivanka’s trip to Games this week

Seoul preps for Ivanka’s trip to Games this week 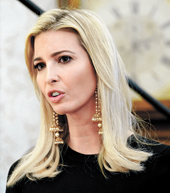 Korea will receive another important guest later this week as part of President Moon Jae-in’s Olympics diplomacy, with Ivanka Trump, the daughter of U.S. President Donald Trump, scheduled to attend the closing ceremony of the international sports event.

According to sources at the Blue House and Ministry of Foreign Affairs, Ivanka Trump, who serves as an adviser to her father in the White House, is expected to lead the U.S. delegation to the closing ceremony for the PyeongChang Winter Olympics, which is scheduled for Sunday.

No official announcement has been made by the two countries as of Tuesday regarding her travel itinerary. The Blue House is coordinating her travel plan with the United States through the Foreign Ministry, sources said. Expectations are high that she will arrive on Friday and leave Monday.

“We believe the meaning of her visit is to celebrate the successful hosting of the Winter Olympics and to highlight the strong Korea-U.S. alliance,” Noh Kyu-duk, spokesman of the Foreign Ministry, said Tuesday. “During her visit, we believe talks can take place naturally on topics where Korea and the United States share mutual interests.”

The spokesman said consultations are still ongoing over the details of her itinerary. “As soon as they are decided,” he said, “the United States will take the necessary action to make an announcement.”

Because she holds an official title in the White House, some speculate that Moon will try to persuade the American first daughter about the U.S. having direct talks with North Korea. Moon will likely have a separate meeting with her to discuss key issues concerning the two countries, including the North’s denuclearization.

Moon had similarly urged the North to engage the United States when he met with the influential sister of North Korean leader Kim Jong-un, Kim Yo-jong. She had a meeting and luncheon with Moon on Feb. 10, when she visited the South to attend the opening ceremony of the Olympics, and Moon stressed the importance of direct dialogue between Washington and Pyongyang during her trip.

Anticipation is also growing in Seoul that Trump may carry a message from her father concerning Moon’s efforts to broker U.S.-North talks, as well as the latest thaw in the inter-Korean relations. North Korean leader Kim Jong-un invited Moon to visit Pyongyang in the near future, and Seoul will likely seek Washington’s support for an inter-Korean summit.

“Some argue that she is in no position to address the Korean Peninsula issue, but she has an official title as an adviser in the White House,” a senior presidential aide said. “Because she has been assisted by former Deputy National Security Adviser Dina Powell, we believe she can play a role on the peninsula issue.”

The aide also said Moon will have a phone conversation with President Trump after checking on the White House’s sentiments on the U.S.-North dialogue through the first daughter’s visit. Seoul is expected to provide the first daughter a special welcome.

When she visited Japan at the end of last year with her father, Tokyo offered her a VIP greeting.

While little is known about her itinerary, she is planning to meet with young North Korean defectors, rights groups said.

According to one North Korean rights group, aides of the first daughter contacted it last weekend to request a meeting with women defectors in their teens and 20s who had suffered rights abuses in their former homeland. The proposal included specific requests that the defectors should be women who came to the South less than five years ago and had no significant media exposure.

Sources also said Trump is considering visiting Yeomyung School, an institute for young defectors, to meet with children from the North.

“They said they want to know about the North Korean regime’s rights abuses of women,” said Park Sang-hak, a rights activist who heads Fighters for Free North Korea. “Since she is operating a fund for women, I think she wants to inform the international community about the rights abuses by the North and appeal for attention.”

A meeting with North Korean defectors was also an important part of U.S. Vice President Mike Pence’s trip to Korea earlier this month, when he headed the American delegation for the opening ceremony of the Olympics.

When Pence met with four defectors on Feb. 9, Fred Warmbier, father of the late Otto Warmbier, also joined them. Otto was an American student imprisoned in North Korea who was released in a vegetative state and died just days after his return.