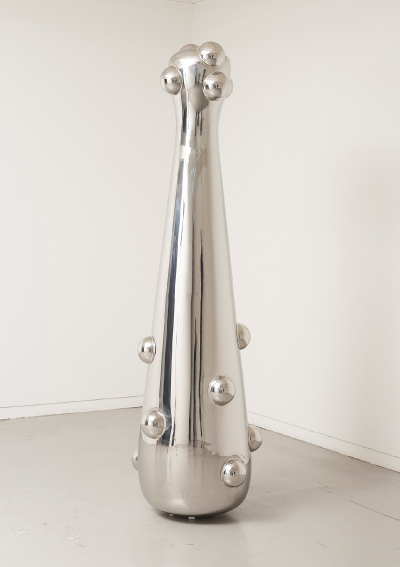 These days, Korean contemporary art is quite polarized; the works are either too highbrow for the general public or too lowbrow, according to Savina Museum of Contemporary Art Director Lee Myung-ok. To address the issue, she has decided to exhibit “one of the few artists in the middle, who can be loved by many people,” sculptor Kim Sung Bok.

Kim’s solo show titled “Dream of Dokkaebi” kicked off at the museum located in central Seoul on Wednesday. The exhibition features sculptures and installations based on the magic clubs that dokkaebi - friendly and mischievous goblins or spirits common in old Korean fables - were believed to have. If a dokkaebi beats the ground with a magic club, called a dokkaebi bangmangi, while chanting a spell, it can get whatever it wishes.

The exhibit includes a forest made of plastic dokkaebi bangmangi. There is also a giant mandala-like circle made up of more than 1,000 small wooden sculptures. They are based on the artist’s poll of more than 100 people of various ages about their dreams and wishes. The objects range from worldly desires such as a wallet filled with bills and a luxury car to things made from pure imagination such as creatures with colored wings. Beautiful, funny and grotesque things are mixed among them.

A solo show of sculptor Kim Sung Bok at the Savina Museum of Contemporary Art includes a giant mandala-like circle that consists of more than 1,000 small wooden sculptures, left, and a forest made of plastic dokkaebi bangmangi, or magic clubs which were believed to be held by dokkaebi, or goblins, in old fables. [SAVINA MUSEUM OF CONTEMPORARY ART]

Also on display is a giant stainless steel sculpture of a dokkaebi bangmangi and stone sculptures of fantastic beasts with their tails shaped like the magic clubs. 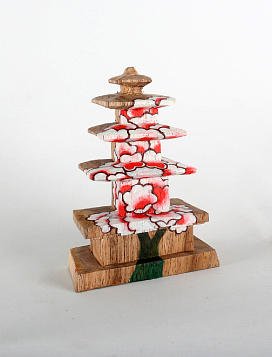 “I have expertise in stone sculptures but this time I have tried wooden and PVC sculptures for the first time to express the various aspects of dreams,” Kim told reporters at the museum on Wednesday.

“At first, I started creating the wooden sculptures with the hope that everybody’s dream would come true,” said the 53-year-old artist, who is also professor of art at Sungshin University. “But I found that there are also negative aspects or dark sides to dreams and wishes. So I decided to express them all in my sculptures.”

He pointed out a small wooden sculpture of a champion who is holding a gold medal too big and heavy for his body, as an example.

The exhibition, which runs through March 24, will be Savina’s final show at its current location near Anguk subway station in central Seoul. The museum will relocate to a space that is a 20-minute walk from Gupabal subway station in northern Seoul in July.