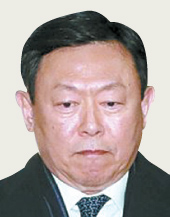 Lotte Chairman Shin Dong-bin, who was placed behind bars on Feb. 13 on bribery charges, stepped down as co-CEO of Lotte Holdings, a Japan-based holding company of the Korean conglomerate, following a board meeting’s approval on Wednesday.

Given that the Japanese firm indirectly controls Lotte Group’s Korean holding company, Lotte Corporation, it is feared that his resignation from the post, which he had volunteered earlier, may amplify the Japanese unit’s influence over the Korean conglomerate’s management and impede various upcoming business projects, including the listing of Hotel Lotte.

The board members agreed to let Shin retain his post as vice chairman while Takayuki Tsukuda, who had assumed the co-CEO position with Shin, will be heading the Japanese firm by himself for the time being.

“Any convicted CEOs are encouraged to step down according to Japanese convention,” said Lotte in a statement following the board meeting on Wednesday, “the board members have decided to accept Shin’s proposal [for his own resignation] after reviewing the opinion of the compliance committee and our management direction.”

The statement added that the “partnership between the Lotte units in Korea and Japan, which has created positive synergy for the past 50 years, is expected to be inevitably weakened.”

“After Shin resigns from his co-CEO position,” said a Lotte spokesperson, “Korean companies in which Lotte Holdings has stakes will have to pursue approval from the Japanese unit, which may hinder proper allocation of investments in the future.”

Lotte Holdings is at the heart of a complicated corporate structure, which is typical for Korean chaebol. It has a 99-percent stake in Hotel Lotte, which then owns multiple stakes across the group’s Korean affiliates. The listing of Hotel Lotte would have become a landmark event for the group’s full transition to a holding company in Korea, but is highly likely to be postponed.

Chairman Shin’s weakened standing at Lotte Holdings may also reignite the rivalry over succession between him and his older brother, Shin Dong-joo, who had managed Lotte Group Japan but lost all his titles, including vice chairmanship at Lotte Holdings, in January 2015 after an embarrassing high-profile feud.