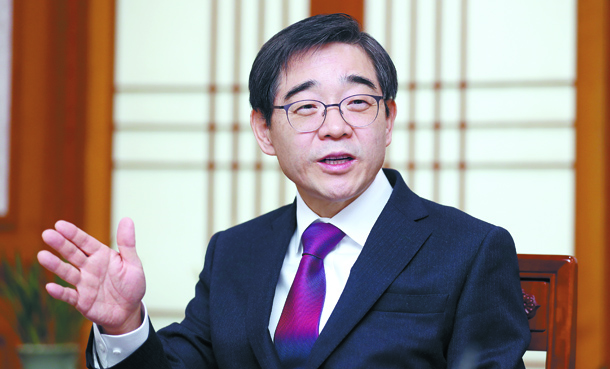 “Creating fake news is not in keeping with the virtues of a democratic citizen,” said Kwon in his first interview after taking the post with the NEC, held with the JoongAng Ilbo at his office in Gwacheon, Gyeonggi, on Feb. 9. It came ahead of the opening of candidate registrations for the June local elections on Feb. 13.

Kwon added that the commission signed a memorandum of understanding (MOU) with the National Forensic Service (NFS) to crack down on any slander or dissemination of falsehoods ahead of the upcoming elections, as he addressed the proliferation of fake news that has recently emerged as a serious problem within political circles.

Kwon, also an incumbent Supreme Court justice, was appointed as the new chairman of the NEC last December after a confirmation hearing.

Kwon, who worked as a judge for over 30 years after passing the national judicial examination in 1980, has great interest in what makes a “democratic republic” and a “democratic citizen,” and repeated the concept several times throughout the interview.

Article 1 of the Constitution stipulates, “The Republic of Korea shall be a democratic republic.” Kwon says he researched the definition and history of the term for over four years.

The NEC chairman has to maintain political neutrality as he carries out election-related tasks in a rational and fair manner.

His Supreme Court tasks will be reduced to approximately half the usual amount for the month of the election. Also, he will not be handling any election-related cases in the Supreme Court in order to maintain political neutrality.

Q. What is the significance of the upcoming local elections?

A. This year marks the 70th year since Korea’s first democratic election on May 10, 1948. Amid heightened fervor for participation through the candlelight demonstrations, this election is a good opportunity to shift the democratic focus to local neighborhoods.

What is the NEC’s plan to combat fake news online?

The division into extreme polarized forces and creation of chaos in society through fake news is totally against the virtue of democratic citizens. I believe those who understand the meaning of a democratic republic will not tread upon others in such a manner.

That is why one of my biggest goals is to expand public education on democratic citizenship during my term in office at the NEC. Current schools are not properly teaching students how to behave according to public values.

To this end, starting from Feb. 13, a task force comprising 200 members on 18 teams — in the central, municipal and provincial governments — will handle slander and propaganda and also run a website to report such cases.

What sort of cooperation will happen between the NEC and NFS through the memorandum of understanding?

This service can send various kinds of online information to the NFS authentication center to analyze if it is fake or not, which will make the process easier. We will also be cooperating with the NFS on the digital evidence authentication service and the development of appraisal techniques.

There are many voters who do not vote because they are disappointed with the system. What is your opinion on that?

The young generations faces many hardships, such as difficulty getting a job or a house, and some give up on having a child. There should be no ruling or opposition parties when dealing with such pressing issues.

Everyone participating and deliberating together is what makes a democratic republic. These are not issues that should be left to politicians. Politicians who are afraid of voters need to be elected, but voters also have to become a force that politicians fear.

Why did you research democratic republicanism?

Since I worked as a judge, I thought it was necessary to properly understand terms such as “justice,” “liberty,” “equality,” “democracy” and “republic.” According to our history, the first appearance of the concepts of possession of sovereignty and a democratic republic was in the 1910s.

I believe some thoughts are also reflected in the recent political awareness of the public. Korea is the first country in Asia to use the term “democratic republic.” We should be proud of it.

From a global prospective, how do you evaluate the NEC’s ability to manage elections?

Last year, Korean citizens proved that even the president is subject to our laws. We are globally recognized as a successful democracy. Our election management skills have been acknowledged globally, so it almost became a brand in itself.

It is not an exaggeration to say we are better than the United States in this area. I hope our equal and reasonable election process becomes a new global trend, led by us.

I hope that this fair and effective process can become a new type of Hallyu [Korean cultural wave]. In reality, many countries’ officials come to Korea to observe our election process.

What do you think of constitutional reform?

The existing constitution has been doing its role well for 30 years. However, in order to reflect a more mature democracy, both the ruling and opposition parties agree that constitutional reform is needed.