The many sides of actor Shim Eun-kyung : The 23-year-old plays a young royal in her latest film “The Princess and the Matchmaker”

The many sides of actor Shim Eun-kyung : The 23-year-old plays a young royal in her latest film “The Princess and the Matchmaker”

Shim Eun-kyung is an actor with many faces. In 2016 alone, the 23-year-old played a zombie in “Train to Busan,” a loner hacker in “Fabricated City” and a confused advertising expert who aids an ambitious mayor running for his third term in “The Mayor.” Just last month in “Psychokinesis,” she played a devastated yet resolute tenant fighting against workers trying to push people out of their homes for an urban renewal project.

Shim’s career started over a decade ago. She started off in the entertainment industry as a child actor in 2003, when she made a short appearance in the hit period series “Jewel in the Palace.” But the actor became publicly recognizable in 2011 in the teen comedy movie “Sunny,” where she played a hard-to-forget high school student who swears as if she is being possessed by spirits. Her biggest hit was “Miss Granny” (2014), in which Shim plays an old woman who mysteriously regains her youth. The movie was later remade in many countries including Indonesia and China.

As her filmography proves, Shim’s thirst for a challenge seems to be endless. In fact, the actor admitted to having felt “pressured to show audiences a new and improved side of [herself]” during a press interview following the release of “Psychokinesis.”

But next week, Shim is set to appear before moviegoers in a new type of role - a princess in the historical comedy drama “The Princess and the Matchmaker.”

Set in the Joseon Dynasty (1392-1910), during a severe drought that struck the nation, the king of Joseon (Kim Sang-kyung) orders the nation’s best fortune-teller Seo Do-yoon (Lee Seung-gi) to help pick the best match for his daughter, Princess Songhwa, with the belief that only the marriage of his daughter could end the years of drought.

However, unhappy about the idea of marrying a man she has never met before, the princess sneaks out of the palace with documents detailing personal information of the candidates to secretly watch them from a distance.

Through the princess’ journey, joined by the fortune-teller, the film sheds light on the importance of love.

“Near the end of the movie, there is a scene, where the princess says ‘What is life without love?’ While working on the film, I learned that love is what drives people to live on. And I hope audiences can sympathize with the message after watching the film, just like I did,” Shim said during a press event held on Wednesday in central Seoul. 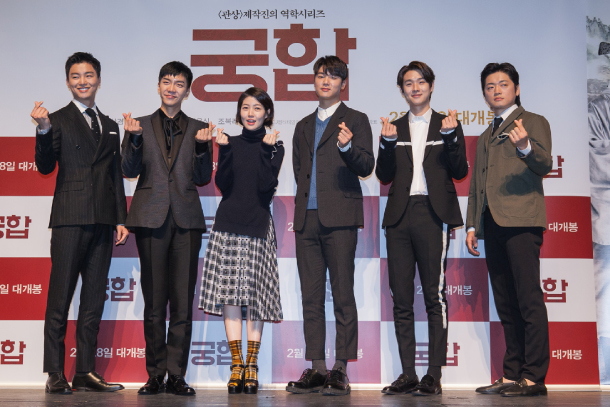 “The Princess and the Matchmaker” is a tale of love, starring Shim Eun-kyung, third from left, and Lee Seung-gi, second from left. [CJ ENTERTAINMENT]

The actor is not just known for her playful roles, but is also critically acclaimed. “Shim Eun-kyung’s career path has been good. She is young, but is prolific. She has played unique and eccentric characters not commonly demanded from an actor in her 20s. Of the films she starred in, many of them, like ‘Miss Granny,’ would have been difficult to turn out the way they were without her. She is an actor with the ability to become a scene stealer regardless of the weight of the role,” said film critic Hwang Jin-mi.

However, regarding Shim’s portrayal of Princess Songhwa, Hwang said that she doesn’t feel that there was anything special about the performance. But, she says that the blame should not be on Shim because, although her acting does not come across as natural, there was not much for Shim to do as all the characters in the film are “very two-dimensional.”

The debut feature from the rookie director Hong Chang-pyo will open nationwide on Wednesday. It is rated 12 and above.