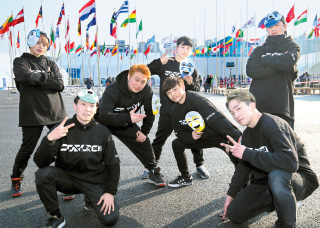 The b-boy group Feeling of Movement poses for a photo at the Gangneung Olympic Village in Gangwon on Thursday. [KIM CHUL-HO]

Knowing that the eyes of the world would be on him, b-boy Kim Young-sub spent the last three months perfecting his dance moves along with his team members in preparation for their biggest performance yet.

Kim danced at the opening ceremony of the PyeongChang Olympics, showing off the Korean b-boying style that has become a distinctive part of the country’s youth culture over the past few decades.

“We dedicated ourselves perfecting every move over the past three months for the welcome ceremony,” said Kim, 29, the leader of the local b-boy group Feeling of Movement.

Kim’s eight-member team, which includes one female dancer, showed off their moves by dancing in a collaborative performance with a samulnori (traditional Korean percussion) group at the Gangneung Olympic Village in Gangwon on Feb. 7 and 8 to welcome delegations to the Olympic Village. Kim’s crew performed for 10 nations.

The b-boying performance drew cheers and excitement from the athletes, a response that Kim said his crew members were deeply moved by.

“Of the around 10 delegations for which we performed, the Canadian and Finnish teams were really enjoying our performance,” Kim said with a smile.

He explained that his team collaborated with the samulnori group because samulnori comes across as the most cheerful Korean traditional music, which he thought could go well with the upbeat b-boy dance. At one point during the performance, Kim’s team, dressed all in black from head to toe, engaged in a dance battle with the samulnori musicians, who were dressed in traditional clothing.

Kim, who began his b-boy career when he was 14, said the performance for the North Korean delegation on Thursday carried a special meaning for his crew, as it could very well have been the first time that the North Korean athletes experienced b-boy culture.

“We were somewhat nervous before the performance, but also we were excited to show them what we had prepared. I was curious as to how they would react to our performance that reflects the culture of young Koreans. At first, they seemed a little stiff. But they relaxed as soon as we asked for their participation. I think it was the power of the same language,” the veteran dancer noted.

When asked if he had any message for the Olympians, he said, “I wish the best of luck to those competing in the games. And I will be really glad if they could enjoy Korean culture while they are here. There are many great things to see and eat here.”