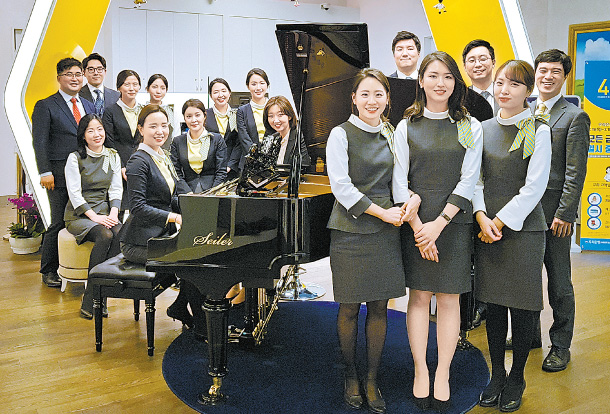 Employees at Woori Bank in Incheon International Airport Terminal 2 stand beside a grand piano at the center of the office. [WOORI BANK]

Among the multiple bank branches on the first floor of Incheon International Airport’s Terminal 2, which opened just last month, Woori Bank used music to stand out.

While there are usually long bench chairs in the waiting hall, there was instead a black grand piano in the center of the hall. There was no one actually playing the piano, but the sound of Chopin filled the space.

The bank said the piano was equipped with an auto-playing function.

To place the piano there, the bank moved its chairs against the walls near the entrance, which is quite far from the bank tellers. This is unusual, as benches are usually very close to the tellers. 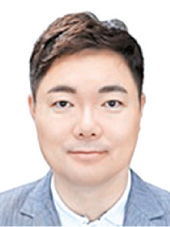 The branch at Terminal 2, the latest to enter the airport, was designed to be an “art bank,” since the new terminal was built to be an “artport.” Incheon International Airport worked with a number of artists, including French artist Xavier Veilhan and Korean artists Kim Byung-joo and Jinnie Seo, to decorate the airport with a variety of works.

“Bank offices are sometimes under pressure because we deal with money and that can cause customers a lot of stress,” said Choi Hyun-koo, an executive director at Woori Bank in charge of managing the operations of airport branches. “Some statistics show more than 30 percent of customers feel relaxed when there is classical music, so we decided to try placing a grand piano in the office.”

Q. You pushed the waiting chairs close to the wall. Don’t you feel you need more space for situations where customers crowd in?

A. When customers are at a distance from the tellers, it is our service principle that our staff members will go and escort customers to the service area when it is their turn. We are living in a digital era, but we can say our service is all analogue.

How has customer feedback been about the piano?

People find it surprising. Customers are generally happy to listen to classical music. No customer has complained about it yet.

What do you think was key for Woori Bank to win its so-called triple crown?

What is your main focus in operating the branches at airports?

Bank offices are meaningless if there are no customers. At Incheon International Airport, about 7,000 customers visit the airport bank offices or currency exchange offices a day. But only 20 percent are regular clients. Our focus is to convert non-regular clients to regular clients of Woori Bank after they receive good service from our branch offices at airports. Our target customers are younger people who travel a lot. Young people these days mostly exchange their currencies online. It would be a shame if they couldn’t find their money at the airport because no branch office is operating there.