There’s no such thing as a cheap lunch

There’s no such thing as a cheap lunch 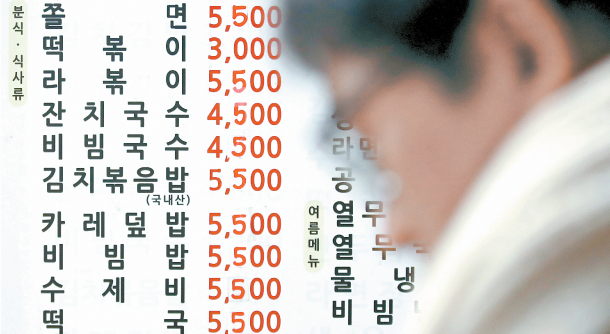 A menu board at a casual eatery selling Korean food has new, higher prices written over original figures. Various eateries increased prices of their menu items this month. [YONHAP]

The cost of grabbing lunch is rising as food franchises jack up prices to deal with a higher minimum wage.

TheBorn Korea, the franchise empire of celebrity chef Baek Jong-won, announced last Monday it will charge customers more for the jjajangmyeon and jjamppong at its franchise Hong Kong Banjeom 0410 stores from March. These two Chinese-style noodle dishes are lunch staples in Korea because of their affordability.

“We recently distributed a notice of the price rise beginning from next month to our franchisees,” said Kim Won-kyoung, a marketing manager at the TheBorn. “We are still deliberating the range of the increase.”

Currently, Hong Kong Banjeom’s jjajangmyeon (noodles with black soybean sauce) and jjamppong (noodles in a spicy seafood broth) are priced at 4,000 won ($3.73) and 4,500 won respectively. Hong Kong Banjeom has 200 stores nationwide and TheBorn Korea, which operates 16 more franchises, is currently contemplating price hikes for two to three of its other brands.

Jjamppong Zizon, another major jjamppong franchise, announced Feb. 19 that it raised the price of its original jjamppong entree to 9,000 won and the larger size to 9,500 won in some branches. Both are increases of 500 won.

“The price increase was inevitable as franchisees kept requesting it, citing rises in both the minimum wage and rents,” said CEO Kang Sung-kyo. “We limited the number of stores affected to 10 or so franchisees that were struggling with rents in Seoul.”

The biggest challenge facing franchise owners is the 16 percent hourly minimum wage hike from 6,470 won to 7,530 won that came into effect last month.

“It’s especially difficult to hire workers in the restaurant industry,” Kang explained. “People don’t want to be paid the minimum wage. You can only get part-timers if you pay at least 8,000 to 8,500 won per hour.”

In many cases, corporate headquarters recommend prices and franchisees have the freedom to adjust prices or not.

One Japanese restaurant franchisee owner increased the price of key menu items by 10 percent before the lunar New Year holidays. “Due to the minimum wage hike, I had to increase monthly labor fees by 150,000 won per person for waiters and kitchen staff,” he said. “We increased prices after alerting the headquarters because we couldn’t make ends meet. Though customer traffic hasn’t declined and no one has complained so far, I am worried that might happen in the future.”

“This is an inevitable response by franchisees at a time of rising rents and labor a costs,” said Kim Dong-soo, vice-chairman of the Korea Franchise Association. “More franchises will undoubtedly raise prices.”

“Though we currently don’t plan to raise prices, we will face growing pressure from franchisees,” explained a representative from BBQ, a fried chicken franchise that ranked third in the fried chicken industry in 2016. Fried chicken joints account for 10 percent of the total 220,000 restaurants under franchises in Korea.

Starbucks Korea, which boasts over 1 trillion won in annual sales, reported that it has “no plans for a price increase but is aware of factors that could lead to it.”

Office workers are not happy.

“Having a bowl of jjajangmyeon and a cup of coffee for lunch will cost me over 10,000 won easily,” bemoaned Jung Young-sik, a 35-year-old office worker. “Though jjajangmyeon and jjamppong were approachable lunch options, it’s sad to know that even they will become expensive.”

“Though I frequent eat at a gimbap [seaweed rice roll] franchise to save money, now even gimbap prices are high,” commented Kim Yoo-young, 39, an office worker.