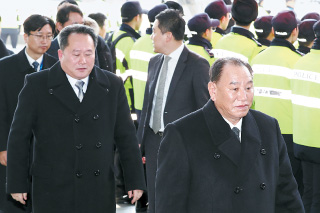 North Korea’s second high-level delegation for the PyeongChang Winter Olympics touched down in South Korea Sunday to attend the closing ceremony, as conservative lawmakers and civic groups here vehemently protested the arrival of Kim Yong-chol, who allegedly oversaw fatal attacks on the South that killed dozens.

Kim, a vice chairman of the North’s Central Committee of the Workers’ Party, who is also known to be director of the committee’s intelligence arm, the Untied Front Department, led an eight-member delegation to the Gyeongui Highway Transit Office in Paju, Gyeonggi, refusing to take any questions from the media as he and his cohorts made their way to Seoul by car.

The top official was accused by Seoul’s former right-leaning administrations of having caused the deaths of 46 sailors by orchestrating the 2010 torpedoing of the Cheonan, a South Korean warship, when he helmed the North Korean Army’s Reconnaissance General Bureau.

He was also suspected to have led the shelling of South Korea’s Yeonpyeong Island later that same year, which killed four people, and the planting of land mines near a South Korean military post inside the Demilitarized Zone in 2015, which severely wounded two soldiers.

Nearly 90 lawmakers and 500 members of the main opposition Liberty Korea Party protested on the southern side of Tongil Bridge in an attempt to block the delegation from heading south, forcing the group to take a detour.

Among the North’s delegation was Choe Kang-il, a deputy director general in charge of North American affairs within the Foreign Ministry, whose inclusion raised speculation about the possibility of an interaction between the delegation from Washington, led by U.S. President Donald Trump’s daughter and adviser, Ivanka Trump.

After arriving at the heavily fortified Grand Walkerhill Seoul hotel in Gwangjin District, eastern Seoul, near Sunday noon, the North Korean delegates were escorted by car to Deokso Station in Namyangju, Gyeonggi, at around 3:30 p.m., where they took a KTX bullet train to Pyeongchang County, Gangwon, to join the closing ceremony at 8 p.m. at the PyeongChang Olympic Stadium.

Upon the group’s arrival in Pyeongchang, President Moon Jae-in met with Kim in an undisclosed location for about an hour from 5 p.m., according to South Korea’s Blue House. Details of the rendezvous were not immediately known. According to the presidential office, Kim and Moon were planned to be seated in the same VIP box as Trump to watch the ceremony.

South Korea’s Unification Ministry, which handles inter-Korean affairs, said 299 North Koreans who visited the South for the PyeongChang Olympics, including four National Olympic Committee members, 45 athletes, 229 cheerleaders and 21 reporters, including support staff for each group, will return home this afternoon by taking a road linking the two countries along the west coast, passing through the Gyeongui Highway Transit Office in Paju.

The high-level delegation including Kim Yong-chol plans to leave South Korea on Tuesday.

The PyeongChang Winter Olympics wrapped up its 17-day run on Sunday night, with South Korea winning a total of 17 medals, including five in gold, eight in silver and four in bronze. The country finished seventh in the gold medal count, tying with Switzerland, France and Austria. North Korea did not win any medals.

A working-level meeting between the two Koreas discussing the North’s participation in the upcoming Paralympics is slated to be held Tuesday at 10 a.m. on the northern side of the Panmunjom truce village, which straddles the border.

Lee Joo-tae, director general for inter-Korean exchange and cooperation at the Unification Ministry, will lead the three-member delegation of interlocutors from Seoul, the ministry said.