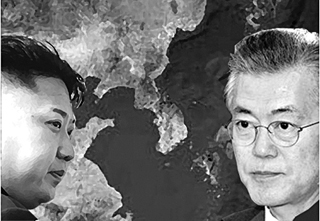 Kim Yong-chol, North Korea’s chief negotiator at senior inter-Korea military talks in the truce village of Panmunjom in North Hwanghae in May 2007, opened his remarks with a joke about U.S. President George W. Bush. It went like this: The president was out jogging when he was almost hit by a car. A passing high school student saved him. In gratitude, Bush told the teenager that he would grant him a wish. The boy asked him not to tell anyone that he had saved Bush. The boy said his father would kill him. Kim chuckled at his own joke.

His South Korean counterpart Gen. Jeong Seung-jo smiled and said, “Well, compared to some countries where no one dares to speak up to the state leader, the United States must be truly a democratic state.”

Kim, a veteran negotiator who had been in charge of inter-Korean affairs since 1989, received an unexpected jab from his novice South Korean counterpart.

When he heard of Kim’s arrival in the South over the weekend, Jeong, now retired, recalled that time. “U.S. generals sent me letters at the time, thanking me for protecting their president on their behalf.”

Kim, presently a vice chairman of the ruling Central Committee of the Workers’ Party, has been a liaison officer since North Korea captured the USS Pueblo, a U.S. spy ship, in 1968. Having spearheaded inter-Korean affairs for nearly two decades, he is an excellent candidate to deliver messages between South Korean and North Korean leaders. But Kim is suspected of masterminding a series of deadly terrorist attacks: the torpedoing of the South Korean naval ship Cheonan, bombarding Yeonpyeong Island and planting mines along the inter-Korean border. He threatened to turn South Korea into a sea of fire by defying the armistice treaty. If Pyongyang was serious about a conciliatory relationship, why did it have to send such a controversial figure to a highly-public Olympics closing ceremony attended by U.S. President Donald Trump’s daughter?

We can only suspect the North is up to its old tricks of trying to stoke conflict among South Koreans. Unsurprisingly, the conservative opposition has vehemently condemned President Moon Jae-in for granting Kim’s visit as an “act of betrayal of soldiers by the chief military commander.” Pyongyang can also congratulate itself for testing international sanctions by insisting on sending Kim, who is blacklisted unilaterally by both Washington and Seoul, and undermining the alliance between South Korea and the United States. But such thinking only underscores how isolated and outdated Pyongyang is.

As Gen. Jeong reminded Kim 11 years ago, there is no state on this globe other than North Korea where everything is decided by a single man. If North Korea continues in its ways, public opinion will disapprove of Moon approach. No president can go against public sentiment. North Korea should be aware that the South Korean community has the flexibility to correct its wrong decisions and find balance — as it cannot.

Moon has been working hard to solve the conundrum of encouraging détente in the inter-Korean relationship without undermining the alliance with the United States. Despite the obvious risk of annoying Washington, he invited North Korean delegates to the PyeongChang Olympics by breaking some international and unilateral sanctions and gave red-carpet treatment to Kim Yong-nam, nominal head of state of North Korea and Kim Yo-jong, sister of North Korean ruler Kim Jong-un. Seoul is rumored to be negotiating to scale down the spring Korea-U.S. combined military drills that were delayed during the Olympics and Paralympics period. Moon, as a result, has invited criticism from the opposition and risked losing conservative voters. He has taken such risks in order to prevent a war.

But the mood for dialogue cannot be sustained if Pyongyang thinks nuclear arms give it the license to insist on everything its own way. We will only understand Kim Yong-chol’s visit upon seeing a sincere message from Kim Jong-un. The situation will return to square one or even to the worst case scenario if Kim walks out of the Blue House after a ceremonial photo session.

At the end of the day, we must see a progressive attitude towards denuclearization from Pyongyang. It could propose a moratorium on its nuclear and missile development programs. State-run newspaper Rodong Sinmun said, “It would be better to wait for the sea to dry out if the world thinks the republic will surrender nuclear [weapons].” Such hard talk doesn’t help. The negotiator in charge of inter-Korean affairs at least should come to say that Pyongyang is open to dialogue on whatever issues Seoul and Washington lay out. Then the stage will be set for Pyongyang and Washington to talk and eventually pave the way for an inter-Korean summit.

The mood in Washington is ominous. Trump threatened additional action if last week’s heavy sanctions do not have an effect. He was indicating a military option. It is obvious the sanctions have taken a toll on North Korea. Why else would its leader send his younger sister, nominal head of state and chief of inter-Korean affairs, to the South? That is not enough. It must demonstrate clearly that it has changed its attitude and direction.

The Olympics have ended. When the Paralympics end in March, South Korea and the United States will go on with the military drills in April. Tensions may rise. We must not waste the peace momentum. The leaders of the two Koreas do not have the luxury of time.