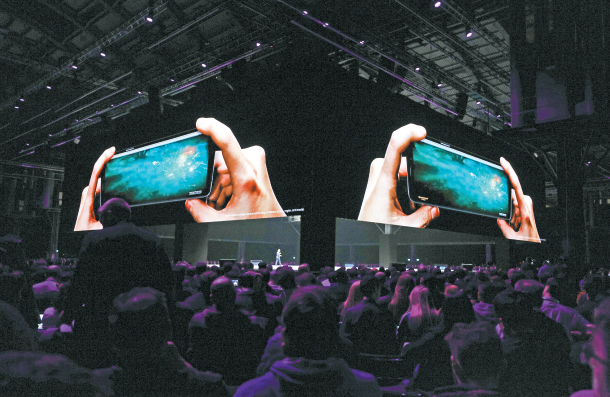 Samsung Electronics’ new Galaxy series is back with a new and improved camera targeting a new generation of customers increasingly turning to communicating with visual content like pictures, videos and emojis.

The Korean electronics giant unveiled the Galaxy S9 and the larger S9 Plus on Sunday at an unpacking event held before the annual Mobile World Congress that kicked off Monday in Barcelona, Spain.

Though the new phone looks like the preceding Galaxy S8 phone in hardware and design, Samsung did try to differentiate the latest Galaxy member by focusing on the cameras. The electronics giant has chosen “the camera, reimagined” as the marketing slogan for the new device.

A notable upgrade to the camera is the so-called Super Slow-mo feature, which allows users to capture blink-and-you’ll-miss-it moments in video about four times slower than existing mobile phone slow-motion technology, according to Samsung. The company increased the camera’s shutter speed to a whopping 960 frames per second. The camera app in the S8 was only able to capture 240 frames per second for slow-motion videos.

“The change was possible by downsizing super-speed image sensors so they can be mounted on smartphones,” a spokesperson from Samsung said.

The camera lenses were also improved so they can capture the best image even in low-light conditions. The dual aperture lenses - F1.5 and F2.4 - used in the rear camera of the S9 series automatically adjusts to lighting conditions and allows users to take the brightest-available shots on smartphones, Samsung said in a statement. The lower the aperture, the brighter the picture gets.

The F1.5 lens, according to Samsung, is the lowest-aperture lens applied to smartphones so far, and has 28 percent improved functionality compared to the F 1.7 lens used on the S8.

A feature highlighted as much as the upgraded cameras was the new augmented reality-based emojis - similar to the Animojis available on Apple’s iPhone X.

The two services share the basic concept that a digitized avatar is created inside the phone reflecting users’ facial emotions; however, Samsung decided to go a step further by making the avatar mimic the actual appearance of the user.

The cartoon-like human avatars are created based on the S9’s facial recognition technology. The phone analyzes 100 distinct facial features from a two-dimensional selfie taken by the device and generates a three-dimensional avatar that looks, sounds and acts like the user. Once the avatar is created, the phone also produces emoji stickers that can be used like emoticons on frequently used chat apps like KakaoTalk, Facebook and the phone’s built-in messaging app.

“The way we use our smartphones has changed as communication and self-expression has evolved,” said Koh Dong-jin president and head of the IT and mobile communications division at Samsung Electronics. “Galaxy S9 and S9 Plus…are designed to help them connect to others and express themselves in a way that’s unique and personal to them.”

Samsung also showed off Bixby Vision, the integration of the company’s artificial intelligence platform Bixby into the camera app. The service offers users a direct translation of menus or street signs just by scanning the phrases with the camera app’s text mode. The AI also gives calorie information when scanning food and shopping information for certain products.

Despite expectations, a new version of Bixby, or Bixby 2.0, wasn’t introduced on the new devices. A delay in development is the most likely reason. In its current version, Bixby Vision seems to offer services similar to Google’s Word Lens.

The new phone also comes with a sound system from Samsung-affiliate Harman International. A dual stereo speaker tuned by Harman’s audio brand AKG gives an immersive sound experience to customers, according to Samsung. It is the first time dual speakers have been mounted on a Galaxy device.

Analysts projected sales of the S9 will hit about 40 million units within this year, a little more than the sales recorded by the S8 but still quite a moderate outlook.

“I think the S9 will sell a bit better than the S8, however 40 million units is still quite a moderate number compared to previous Samsung phones,” said Lee Seung-woo, an analyst from Eugene Investment & Securities. “The projection is based on expectations that growth of the smartphone market will be quite slow in the early half of this year.”

The Galaxy S9 starts with a 957,000 won ($890) price tag in Korea, while the S9 Plus will cost 1,056,000 won - both prices for the 64 gigabyte models. Korean mobile carriers are offering different discount packages depending on users’ phone plans and purchase options.