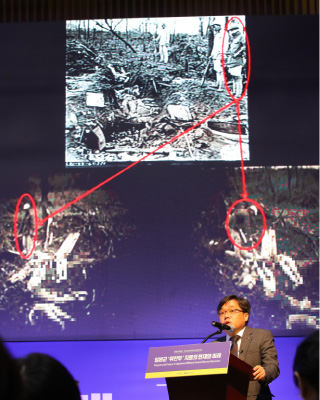 A team of Korean scholars and researchers discovered a video clip in the U.S. National Archives and Records Administration and disclosed the video showing a 1944 massacre by Japanese troops during an international conference in Seoul on wartime sexual slavery on Tuesday. [YONHAP]

A film clip was made public Tuesday for the first time, showing a 1944 massacre by Japanese troops of Korean women during World War II.

The clip adds to the existing documentary evidence that the Japanese military shot 30 Korean girls to death in the western Chinese city of Tengchong, near Myanmar, on Sept. 13, 1944.

A team of South Korean scholars and researchers discovered the video in the U.S. National Archives and Records Administration and made it public Tuesday during an international conference in Seoul on wartime sexual slavery.

The 19-second clip, filmed by Allied forces of the United States and China, shows a group of bodies abandoned en masse, and a Chinese soldier, who is believed to have been at the scene to bury the bodies, taking a sock off of a body.

In 2016, the same research team disclosed the Allied forces’ operation diary saying, “Night of the [Sept.] 13th, [1944,] the Japs shot 30 Korean girls in the city [of Tengchong, China].” Words such as “whores,” “comfort women” and “prostitutes” were used throughout other relevant records, indicating the 30 women mentioned in the page were former sex slaves.

According to researchers, about 70 to 80 Korean sex slaves, also known as “comfort women,” were in Tengchong when the U.S.-Chinese forces took over the city from Japanese forces. Twenty-three of them were captured by the Allied forces as prisoners, and the rest were believed to have been massacred by Japanese troops.

Researchers said that after discovering the photo, they kept searching for a corresponding video as they believed such a video would exist because, during the war, U.S. military photographers usually worked as a pair with videographers.

The research team found the video last year and has since conducted verification research.

“This video shows the situation and reality Korean comfort women faced at the end of the war at a time when the Japanese government denies the killing of comfort women by Japanese troops,” said Kang Sung-hyun, a member of the research team and a professor at Sungkonghoe University in Seoul.

The Seoul Metropolitan Government, which has provided support for the research team’s work, said Japan should acknowledge its wrongdoing and offer an apology so that a similar tragedy won’t happen again.

Historians estimate that up to 200,000 women, mostly from Korea, were forced to work in front-line brothels for Japanese troops during World War II. The issue is increasingly urgent, as most of the surviving South Korean victims are in their late 80s.

In December 2015, Seoul and Tokyo reached a deal to resolve the issue, in which Tokyo expressed an apology for its colonial-era atrocities and agreed to provide 1 billion yen ($9.16 million) for a foundation aimed at supporting the victims.

But the agreement has been deeply unpopular in South Korea amid criticism that the government of then-President Park Geun-hye agreed never to raise the issue again in exchange for compensation without agreement from the victims.