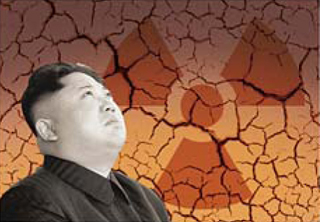 Recently, South Korean experts on North Korea were discreetly called to an undisclosed location to share their thoughts on intentions behind Pyongyang’s Olympics charm offensive. They were asked whether they sensed actual changes in the Pyongyang regime and why they thought it shifted to a posture of dialogue. After blasting missiles and threatening nuclear war last year, North Korea’s leader Kim Jong-un sent his sister to the opening ceremony of the PyeongChang Olympics carrying an invitation for a summit meeting to his South Korean counterpart Moon Jae-in. There must be a logical explanation behind such a dramatic transition.

Some pointed to the effects of toughened sanctions. North Korea’s coal output plunged 39 percent last year compared to the previous year. Exports to China plummeted 66 percent. The dimished trade must have affected marketplaces where goods are exchanged in U.S. and Chinese currencies. Foreign exchange rates, rice and gasoline prices have nevertheless remained oddly stable as of February, suggesting Pyongyang authorities could be drawing on national reserves in order to keep up a façade of normalcy. Economic sanctions cannot entirely explain Pyongyang’s about-turn. Experts predict the international sanctions could cause deeper woes for the North Korean economy in September or October.

Most agreed that Pyongyang would have felt intimidated by Washington’s direct threats of military action. Washington’s boasts of a military strategy sounded too real to be regarded as a bluff. U.S. Secretary of State Rex Tillerson in December shared surprising military intelligence that Washington and Beijing had discussed ways to go in and snatch away North Korea’s nuclear weapons in the event the Pyongyang regime collapsed. According to reports, Tillerson said the United States and China agreed that the most important thing would be securing the nuclear arsenal and ensuring it does not fall into the hands of wrong people.

Although China would have likely wished to keep such a discussion private in order not to lose leverage over North Korea, with which it has a historic alliance, it did not publicly deny or respond to the comments. Even scholars in China have been advising Beijing to openly discuss the possibility of dramatic events in North Korea with South Korea and the United States. The scenario of a regime collapse could have given Kim a scare. Kim probably began to sense that Donald Trump may not be all bluster in his “fire and fury” rhetoric and leaks of discussions of a “bloody-nose” strike.

The idea of a so-called bloody-nose strike, or a restricted military attack on North Korean military or nonmilitary sites designed to humiliate or put fear in Kim Jong-un, has been circulating since December. It must worry Pyongyang as it directly targets the top leadership. The Kim bloodline, as the world’s most enduring hereditory dictatorship, is enshrined with godlike, absolute power. The regime has been sustained through the means of a personality cult. A “bloody-nose” operation aims to disgrace the divine leader. If Washington carries out such an operation, Kim has only two options in response. If he counterattacks, North Korea is doomed. If he does not, the dynasty started by his grandfather could face the risk of implosion. The state’s viability and the sustainability of North Korea’s dictatorship would be in danger. Kim must do all he can to stop that.

President Moon Jae-in has vowed to do everything to prevent a war on the peninsula. He sent a strong message to the United States that no military actions can be allowed without South Korea’s consent in his Liberation Day address last year. In December, he made it clear that he opposes a preemptive strike. Kim would have paid heed. North Koreans coming to the Olympics with an olive branch was meant to keep the U.S. military option at bay through the Moon administration, according to experts.

The domestic media has been criticizing the Moon administration’s over-indulgence of North Korea. But key officials at the Blue House and the National Intelligence Service do not agree. They relayed that it had been North Korean officials who asked Seoul to arrange meetings with the United States. Seoul’s role has become that important.

But what is worrisome is that Seoul could be shunned after its role is completed. The worst scenario for South Korea is that Washington could more or less tolerate Pyongyang’s nuclear arms as long as its intercontinental ballistic missile threat is removed. That would allow Trump to triumphantly declare that the U.S. mainland is free from a North Korean nuclear missile threat — thanks to him. China would be pleased to see that scenario work out. Moon could boast about preventing a war, but nuclear arms are a unique form of weaponry. History shows that nuclear-armed states tend to renew conflicts and expansion campaigns. A successful nuclear test in October 1964 emboldened China to wage conflict with the Soviet Union to the brink of war of the Ussuri (Wusuli in Chinese) River in 1969. Conflict over Kashmir escalated after rivals India and Pakistan both went nuclear in the 1990s.

Before the two Koreas hold a summit or Pyongyang and Washington attempt any kind of dialogue, removing the nuclear threat from North Korea should come first. Trump holds the key. Since his goal is to dismantle North Korea, he could go on tightening sanctions until Pyongyang gives in. The Moon Jae-in government must be aware that it won’t be easy to handle Pyongyang once it is fully nuclear-armed. It should be resilient to the possibility of North Korea threatening the front-line islands with nuclear weapons.

It is therefore essential to keep up sanctions while arranging dialogue between North Korea and the United States until Pyongyang is disarmed of nuclear weapons.