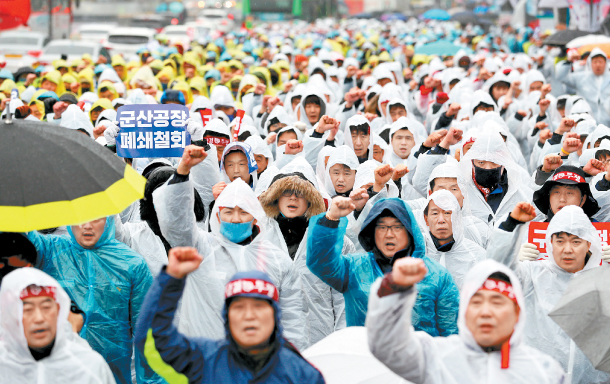 Unionized workers at GM Korea stage a sit-in protest on Wednesday in central Seoul, claiming a withdrawal of the Gunsan plant shutdown and suspension of the ongoing restructuring plan. [YONHAP]

Layoffs have begun at GM Korea as the company negotiates whether it will remain in Korea or not.

Some 200 contract workers at GM Korea’s imperiled Gunsan factory said Wednesday they received text messages last month to leave their jobs by the end of March as GM Korea refused to extend contracts with their outsourcing companies.

The Detroit-based automaker has said it will shut down the Gunsan plant by the end of May as part of a restructuring plan of its money-losing affiliate, but it is also in complicated talks with the government to try to turn it around.

An emergency association representing the Gunsan plant’s contract workers announced Wednesday that some contract workers were fired by a single text message sent by their outsourcing agencies.

GM Korea executives are seeing pain on the horizon, too.

GM Korea sent out an email Wednesday that included the company’s plan to shrink the number of executives, including those dispatched from the U.S. headquarters.

“The international service personnel [dispatched from Detroit] will be cut by 45 percent,” it added.

The company said it will freeze wages of workers above the team leader level this year.

According to local reports, the contract workers vulnerable to the latest layoffs number around 500, but precise figures haven’t been revealed by the company.

On the same day, GM Korea and its union resumed wage talks, the first negotiation since the U.S. headquarters made the surprise announcement about shutting down the Gunsan factory on Feb. 13.

The talks ended without a tangible result. According to local reports, freezing full-time workers’ wages and eliminating bonuses as suggested by the company last week wasn’t discussed. The talks reportedly focused on who should take responsibility for the company’s plight and such hot-button issues as excessive R&D fees paid to the U.S. headquarters.

Some 1,500 unionized workers of GM Korea took to the streets Wednesday evening.

“Investigation should pursue what has put GM Korea into this crisis. The union has to take part in coming up with a turnaround plan and long-term management plan for the future,” he added.

Meanwhile, GM Korea started offering voluntary retirement packages to all of its 1,600 workers after the announcement of the Gunsan plant shutdown.