Products you can see through have clear appeal

Products you can see through have clear appeal 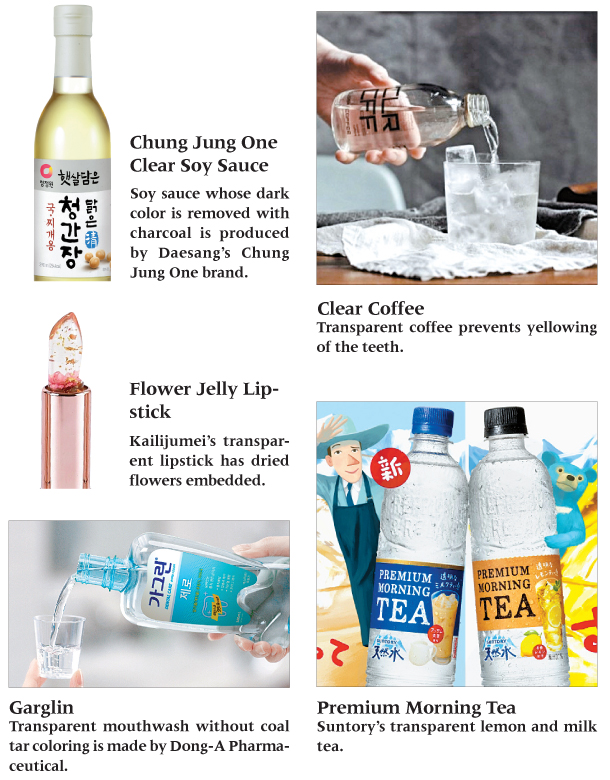 Color is out and clear is in.

One of this year’s big marketing trends is removing color from such pantry staples as soy sauce to mouthwashes and lipsticks. It’s the ultimate in minimalism.

Korea’s first clear soy sauce came out in January, its dark pigment removed with charcoal. Rather than being absolutely clear, the product is a light yellow tint.

Daesang Corporation, a soy sauce maker for 40 years, decided to develop the new product after registering interest from customers.

“There were many consumers who complained they could only use salt to flavor dishes because soy sauce would darken the food,” explained Moon Hyung-doo, a Daesang marketing manager.

“We wanted customers to be able to use soy sauce while maintaining the original color of the ingredients when cooking steamed egg or seasoned vegetable dishes.”

Self-declared coffee addicts, the brothers claim to have developed a cold coffee product that won’t yellow the teeth.

Though Clear Coffee may look like a 200 milliliter (6.76 ounces) bottle of water, it actually has 100 milligrams - or two espressos’ worth - of caffeine per serving.

After attracting considerable attention in Europe, Clear Coffee expanded into Asia in January, starting with the Korean market.

Currently only accepting online orders, the brothers plan to make the drinks available at duty-free shops and hotels here by the end of 2018.

“The coffee is made from water and freshly roasted coffee beans without any artificial additives, but the exact recipe is kept secret even at our British headquarters,” said Kim Tae-hoon, the Asia representative for Clear Coffee.

Brewed with natural water and Assam tea leaves, the drink maintains the scent and taste of conventional milk tea without a bitter aftertaste.

“It was important to describe what a mouthwash does before it became a mainstream household item in Korea,” explained a Dong-A Pharmaceutical spokesman.

“Recently, we began emphasizing transparency to differentiate our products from competitors.”

Garglin reported a 10 percent increase in annual sales compared to the previous year after revamping its advertising campaign to highlight the product’s transparency.

“Clear products have the image of being honest and clean without any trickery,” said Kim Tae-hoon of Clear Coffee. “The lack of color also helps emphasize the absence of additives, which is a feature of our coffee.”

Clear lipstick from Thai cosmetics brand Kailijumei took the Korean makeup scene by storm when it proved that color - the essence of a lipstick - wasn’t actually necessary.

Kailijumei lipsticks are not only pretty to look at - studded with golden flakes and dried flowers - but they also change the shades of users’ lips after reacting with their body temperature.

It’s important, however, for companies to prove that colorless products are not just novelty items.

“Color harmonizes with a product’s visual and olfactory characteristics and adds to its value,” explained Bae Yong-jin, who teaches classes on creating optimal color combinations for product design and artworks.

“Though transparent colors may succeed in drawing attention at the start, we will have to wait and see whether they will lead to sustained sales.”