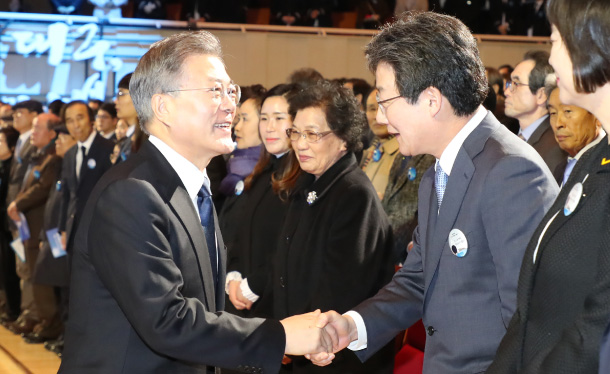 President Moon Jae-in visited Daegu on Wednesday to attend a commemoration event marking the 1960 democratization movement by the city’s students.

The Feb. 28 democracy movement was a protest by students in Daegu ahead of the presidential election in March 1960 to protest Syngman Rhee’s dictatorship. It later prompted a larger protest in Masan on March 15, 1960. The Daegu movement is also seen as the main cause of the April 19 revolution that same year, which overthrew the Rhee regime.

In 2000, then President Kim Dae-jung attended the 40th anniversary of the movement in Daegu.

Moon, who was elected after the months-long nationwide candlelight protests that led to the ousting of his predecessor, Park Geun-hye, praised the Daegu democracy movement as the “first moment in the history of Republic of Korea that the people overthrew a dictator with their own power.”

He also said that although the movement was the country’s first democracy movement, it failed to receive proper attention for decades. Comparing its significance to the May 18, 1980, democratization movement in Gwangju, Moon said the alliance and cooperation between the two cities must work as a compass for the country to overcome any future challenges.

It was Moon’s first visit to Daegu since he took office. The city and North Gyeongsang, often referred as the TK region, are longtime conservative strongholds. When he was a presidential candidate, Moon started his campaign in Daegu by visiting the democracy movement memorial tower in order to promote national unity.

In the May presidential election, Moon won an overwhelming victory with 41.09 percent against his conservative rival, Hong Joon-pyo, who scored 24.03 percent. But, in Daegu, Moon recorded 21.7 percent and Hong 45.36 percent. In North Gyeongsang, Moon scored 21.73 percent and Hong 48.62 percent.

The visit also took place ahead of the June local elections. The conservative opposition Liberty Korea Party had won an overwhelming victory in Daegu and North Gyeongsang by winning not only mayor and governor posts, but also almost all district heads and local legislative councils in the last local elections. The liberal Democratic Party of Moon has no representation in the region. In his speech, Moon largely praised Daegu, calling it the “hometown” of independence activists during the Japanese colonization period. He also said the city was the bastion that defended the country during the Korean War and the center of industrialization for the country’s economic growth.