Me Too movement takes on lechery in academia

Me Too movement takes on lechery in academia 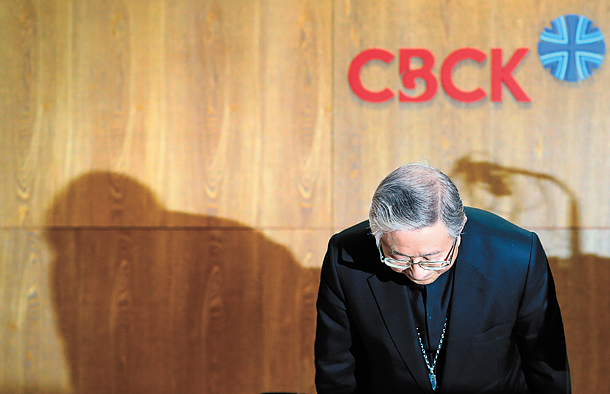 Archbishop Hyginus Kim Hee-joong on Wednesday issues an apology over allegations that a Catholic priest attempted to rape a female volunteer worker multiple times in 2011 and 2012 during overseas missionary work in South Sudan. He vowed to pursue legal action against the suspect. [YONHAP]

Korea’s Me Too movement has been adopted on college campuses with students complaining about sexual misconduct in large numbers ahead of the start of spring semester.

Park Ji-su, 23, who heads Chung-Ang University’s so-called Gender Equality Committee, said phone calls to her group have shot up from nearly zero to more than five a day as a result of awareness about the Me Too movement among young adults.

Thirty-four similar groups across the country that fight for women’s rights on campus are planning to convene on next Wednesday’s International Women’s Day to support people who speak up about sexual assault and harassment they have suffered.

On Wednesday, Archbishop Hyginus Kim Hee-joong issued an apology over allegations that a priest attempted to rape a female volunteer multiple times in 2011 and 2012 during overseas missionary work in South Sudan, and vowed to pursue legal action against the suspect.

At Sejong University in Gwangjin District, eastern Seoul, a former fine arts professor who earned fame in the local theater industry as a play director was accused of abusing his students over the past eight years, allegedly telling them they needed “sexual appeal” in order to be an actress, and that the casting couch was a “definite thing.”

“He ignored our human rights many times,” a Facebook user who identified herself as a Sejong University graduate wrote last Thursday on an anonymous page for Sejong students, “and treated us like his girlfriend or his slave. Without any hesitation, he used to tell his female students they were sexy and insisted on driving them home, even when they resisted.”

Two days later, other Sejong undergrads and alumni chimed in. One Sejong alumnus quoted the professor as saying, “No doubt an actress needs to entertain. They have to be passionate enough to get naked and run in there. If you don’t have the guts, just get married.”

One Sejong undergrad said she was told by the professor: “If you want to be an actress, you have to give your all.” When she asked whether she couldn’t avoid a sleazy situation, the professor shot back, “If a director tells you he wants to sleep with you, will you not?”

Another Sejong undergrad recalled the professor repeatedly saying during class that having sex with a director was a “definite trade.”

When asked by a JoongAng Ilbo reporter for an explanation, the professor adamantly denied the accusations over the telephone, saying he meant to warn his students against the industry’s dark side and prepare them to cope with those situations when they enter the real word.

At Hanyang University in Seongdong District, eastern Seoul, a graduate school student claimed she was sexually harassed by a lecturer who used to habitually tell her, “Let’s build a passionate relationship.” When she reported the case to her academic adviser, she was told she was “too sensitive” and that she mustn’t leak the story to anyone else.

The adviser, she said, turned out to be the next perpetrator.

“He was like, ‘Think of me as your brother. Are you seeing anyone? Have you ever truly loved anyone?’” the Hanyang student said in a recent radio interview with CBS.