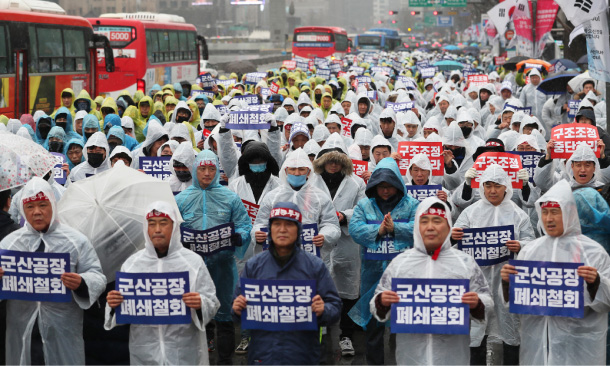 Unionized workers at GM Korea stage a protest Wednesday in central Seoul, demanding the Gunsan plant not be shut down. [YONHAP]

Cough up some money or deal with lots of layoffs. That’s GM’s challenge to the Korean government. There aren’t many squares on the chess board left for the Korean government. The game is over once the Korea Development Bank (KDB) declared it would conduct due diligence on GM’s local unit. They are caught in the trap that GM designed. The only option is to tell GM to pack up and leave, but who can decide that? It’s not something the “jobs administration” can do before an election. It is particularly hard for the president to go that far. The only option is to share the losses with GM, offer minimum assistance and try to keep as many jobs as possible. This will take deep consideration, and I propose three tactics.

Firstly, a command center has to be designated. After much discussion, the Ministry of Strategy and Finance, the Financial Services Commission and the Ministry of Trade, Industry and Energy decided that the Ministry of Trade would oversee the process in consideration of the “industrial aspect” of carmaking. But that is not desirable. To me, “industrial” sounds like “political.” The priorities here are a local economy, local industry, local parts makers and local jobs. Then, belligerent trade unions and politicians will get involved. Restructuring taxpayers’ money, national industrial policy and future industrial engines will become secondary issues. The Ministry of Strategy and Finance and the Financial Services Commission must not hide behind the ambiguous phrase “consideration of industrial aspects.” That is no different from not taking responsibility.

Secondly, a bigger picture needs to be considered. We should look beyond the automobile industry and consider the overall industrial structure of the country. The traditional automobile industry is already declining. The future of car makers cannot be guaranteed without integrating artificial intelligence, self-driving technology and other aspects of the fourth industrial revolution. Tesla is thriving more than traditional car makers like Hyundai and GM. Even if GM makes an outstanding model in Korea, that will only delay its decline. GM headquarters is working hard to get out of the crisis. If you focus on the GM Korea issue only, there is no answer to be found. Korea has been catching up with changes and innovations of the international industrial structure, from agriculture to light industry to heavy and chemical industries to information technology. We need to use that experience and wisdom and begin by drawing a big picture connecting the GM situation with the fourth industrial revolution.

Thirdly, we need to change the rules and directly appeal to GM headquarters. GM Executive Vice President Barry Engle is dealing with the Korean government, and he is a second man at best. He has to follow decisions from GM CEO Mary Barra or the board of directors. Let’s look at it this way. Say Hyundai Motors wants to shut down a subsidiary in the United States. Would the U.S. government negotiate with Hyundai’s U.S. branch head or fly to Korea and talk to Chairman Chung Mong-gu?

One man can respond to the three suggestions at once. It is KDB Chairman Lee Dong-geol. He was a vice chairman of the Financial Services Commission during the Roh Moo-hyun administration and was considered for the post of presidential economic advisor. Throughout the rightist administrations, he wrote acutely critical columns for a liberal newspaper. He is a man of principle and thinks the state-owned bank should not use taxpayers’ money to help insolvent companies. He is considered a loyal supporter of the late president Roh Moo-hyun. He is politically free from Kim Dong-yeon, Choi Jong-gu and Paik Un-gyu, who need to keep up with the Blue House direction. The KDB is the second biggest shareholder in GM Korea. If the Ministry of Planning and Strategy and the Financial Services Commission decide to provide government assistance, the Korea Development Bank will be the entity that coughs up the money. In ice hockey terms, KDB is the goalie.

Lee is a prestigious economist with a Ph.D. in economics from Yale University. He can personally fly to GM headquarters and face Mary Barra or the board of directors. The biggest shareholder of GM is the United Automobile Workers, which has a 9.9 percent stake. Rest of the shares are mostly held by asset management groups. Since GM filed for bankruptcy in 2009 and government funding was used, GM has become a virtually ownerless public company. It is similar to KB Kookmin Bank or POSCO. With greater vision, we can find better options. Lee Dong-geol should be entrusted with full authority and sent to GM.