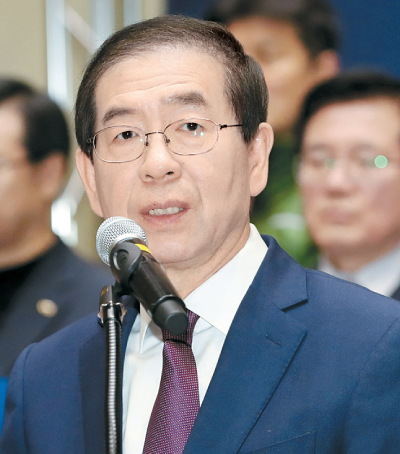 Seoul Mayor Park Won-soon calls for a constitutional amendment to decentralize the power structure at Seoul City Hall on Thursday.

“Local governments experience and witness the lives of ordinary citizens the closest,” said Seoul Mayor Park Won-soon at a press conference at the Seoul City Hall on Thursday.

Park added, “At a time when the central government could not respond efficiently to national disasters, such as the MERS [Middle East Respiratory Syndrome] outbreak and the Sewol ferry disaster, it was the local governments that stood at the frontlines to tackle these problems. “Which is why the local governments must be granted more freedom in legislation and budgetary decisions.”

Park continued, “With a constitutional amendment for this, the local governments will be able to adjust the laws and budgets according to the changing needs of the people.”

The mayor used the legislation powers of London, Paris and New York as examples.

“When an area is developed in Seoul, the real estate prices in the area skyrocket so fast, driving out the original residents,” he said. “The Seoul Metropolitan Government can protect these original residents by keeping the price hike under control, as in New York.

“It can also protect the people from fine dust if it can issue legally-binding bans on cars on bad air pollution days,” he said. “The mayors of Paris and London have this power. Seoul can do more than now if it has the same authority.”

Currently, local governments have legislative power to “enact provisions relating to local autonomy” but the power is limited by the Constitution to be “within the limit of acts and subordinate statutes.”

Their legislative power is further limited by Article 22 of the Local Autonomy Act: “…when such local governments determine matters concerning the restriction on rights of residents, the imposition of obligations on residents, or penal provisions, they shall have the authority delegated by Acts.”

“We are not asking for more legislative and budgetary power simply to have more power,” said Lee Hae-sik, president of the association of district office heads of Seoul. “In regards to national disasters, the local governments need more freedom in issuing laws and starting projects, so that it can take part in the work of the central government in safeguarding the lives of residents.”

Amending Article 59 of the Constitution, which states, “Types and rates of taxes shall be determined by act,” has also been on the table for discussion among local governments, some of which have suggested an amendment to allow local governments to determine the area’s tax rates according to its needs.

President Moon Jae-in has been seeking to hold a national referendum to amend the Constitution on June 13, the same day as local elections. It is unclear yet if his wishes will be granted, as the inter-party squabble continues in the Assembly.

While the ruling Democratic Party has recently charted its plan for constitutional revisions, which will focus on introducing a U.S.-style four-year presidency with a possibility of re-election, the main opposition Liberty Korea Party is refusing to discuss the issue, calling it an attempt by the Moon administration to extend its rule.