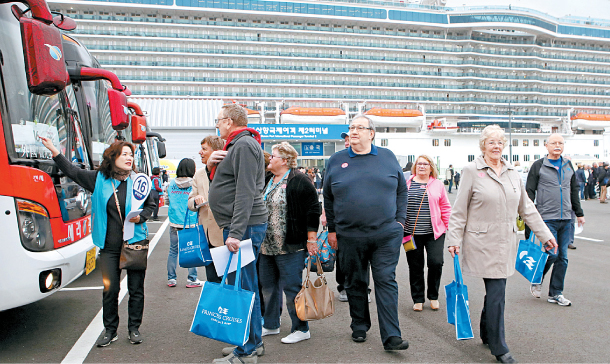 Although the Majestic Princess, a 143,000-ton cruise ship based in Shanghai, docked at the Busan Port on Wednesday, only 14 of the 3,600 passengers were Chinese. [SONG BONG-GEUN]

The number of Chinese nationals visiting Korea during the PyeongChang Winter Olympics was only 10 percent of what was predicted, a sign that Beijing is continuing to punish Seoul for deploying an American missile defense system.

“Around 20,000 Chinese found their way to Korea for the Olympics,” said Jang Ji-won, a spokesman for the New Hwacheong International Tourism Company.

The Korean government had expected 200,000 people and even offered visa waivers for Chinese nationals who purchased at least 200,000 won ($184) worth of tickets for the Games, which lasted from Feb. 9 to 25. Those visitors were allowed to stay for 15 days without a visa. While Korea welcomed 1.4 million foreign visitors during the Olympics, only 1.4 percent were Chinese.

Some analysts see this as a sign that the Chinese economic retaliation over the Terminal High Altitude Area Defense (Thaad) system is far from over. Korea-China relations deteriorated over the past year as Beijing lashed out at Seoul for the Thaad deployment, which was announced by Seoul and Washington in July 2016. The deployment was completed last September. 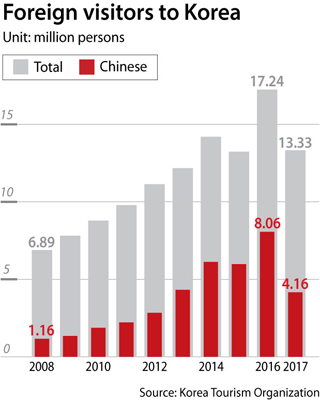 Although the Moon administration stressed that the measure was “temporary,” China carried out a year-long unofficial economic blockade of Korean companies, artists and some products and forbade group tours to Korea. Beijing said Thaad’s powerful radar can spy on Chinese territory.

There was some optimism in foreign policy circles that Beijing may ease its economic retaliations during the Olympics, after President Moon Jae-in suggested to Chinese Premier Li Keqiang on a visit to Beijing in December to designate 2018 and 2022 as special years for the two countries to support each other’s Winter Olympics.

“[Li said he would] consider the proposal seriously,” the Blue House said in its statement after Moon’s trip. “He said that lots of Chinese will come to Korea to see the Games.”

But in the end China designated 2018 “EU-China Tourism Year” instead. China’s National Tourism Administration partially lifted its ban on group tours to Korea in November, allowing offline tourist agencies in Beijing and Shandong Province to sell package tours to Korea. But compared to last year, arrivals are low.

According to Korea’s immigration authorities, a total of 305,127 Chinese entered Korea in January, a 46 percent drop compared to January 2017.

The Lotte Group continues to suffer from Beijing’s economic retaliations. In 2016, the military selected the Lotte Skyhill Country Club in Seongju, North Gyeongsang, as the site for the Thaad battery because of its high altitude and easy accessibility for military vehicles. Earlier last year, the conglomerate handed over the property in return for real estate of similar value from the government, and that made it a main target of China’s economic retaliations.

From November 2016, Chinese authorities started fire and tax inspections on Lotte Marts in the country. Several stores were fined and from March 2017 suspensions began. Currently, 87 Lotte Mart branches in China have closed. Lotte decided to leave the Chinese market in September but negotiations to sell the marts to Thailand’s CP Group fell through in January. Lotte is reportedly seeking other buyers. Lotte had to halt a 3 trillion won project to build a Lotte World theme park in Shenyang.

Media reports have estimated that the conglomerate suffered some 2 trillion won in losses due to the Chinese action, and the Korean economy lost some 10 trillion won.

“All we can do is wait and see,” said a spokesperson of the Lotte Group. “We can’t just pack our things and leave the Chinese market when things get difficult. The Korean government is trying all it can to help the situation so we are keeping our hopes up.”

But there is a limit to how much the central government can do for Lotte.

During a meeting between South Korean Finance Minister Kim Dong-yeon and China’s National Development and Reform Commission Chairman He Lifeng in Beijing in February, Lotte was not invited to a gathering of CEOs of China-based Korean corporations hosted by Kim.

“The mood here in Beijing is that you don’t want to mention even the letter ‘L’ for Lotte,” said a Korean government insider.

The unofficial ban on Korean television dramas and movies is also continuing, according to industry insiders.

“Everything is still pretty much blocked - the airing of Korean dramas and movies on Chinese TV and portal websites, the K-pop performances in China, and the advertisements featuring Korean celebrities,” said an official of a Korean cultural government agency.

But some in the Korean government remain optimistic.

“Because these retaliation measures were not officially levied by the Chinese government, it may take a while before they are completely lifted,” said an insider in the Korean Foreign Ministry. “These things take time.”