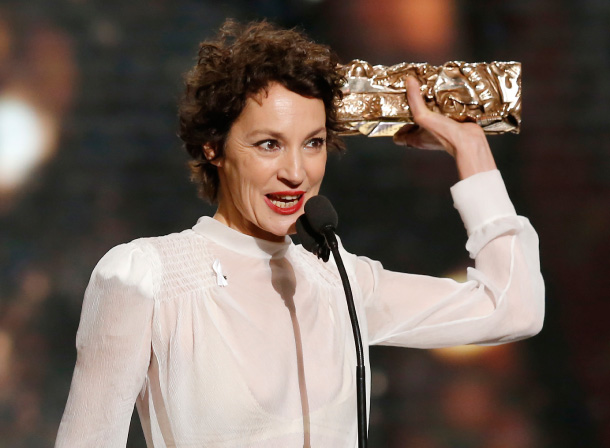 French actress Jeanne Balibar speaks on stage after receiving the Best Actress award during the ceremony of 43rd Cesar Film Awards at the Salle Pleyel in Paris, on Friday. French stars including Balibar wore white ribbons to protest sexual misconduct in the film industry. [AP/YONHAP]

PARIS - The French film world may be having its Me Too moment.

One after another, stars showed up at the industry’s top awards show Friday wearing a white ribbon in protest against sexual misconduct. Throughout the Cesar Awards ceremony, presenters and winners referenced the movement that has campaigned for an end to abuses by powerful men.

And the packed concert hall stood in ovation as the presenter called on everyone to support the #MaintenantOnAgit (Now We Act) campaign launched this week, aimed at raising money to help women pursue legal complaints against abusers.

Anger over sexual violence and demands for gender equality in the cinema industry charged the atmosphere around this year’s Cesars - much like around the Oscars coming up Sunday in Hollywood.

Instead of wearing black - as actors in the United States and Britain have done at recent awards shows - French stars chose to wear a white ribbon to make their statement.

So did special guests like Penelope Cruz, given a special award for her career’s work.

“The entire world is talking about this, it’s not only a problem of our industry, but of all industries and of any woman who does not have the opportunity to have a microphone in front of her as I have myself,” she told reporters.

The most Cesar awards went to the AIDS drama “120 Beats Per Minute,” which took six prizes, including best film. Directed by Robin Campillo, the movie centers on the activist group ACT UP in Paris in the 1990s at the height of the AIDS crisis.

Producer Marie-Ange Luciani hailed the social change since that era, including growing acceptance of gay marriage. She also had a message for those disconcerted by the turmoil prompted by the Me Too movement that started in Hollywood with sexual abuse accusations against producer Harvey Weinstein.

“Don’t be afraid of what will happen. This moment is not a threat. It is a promise. And history will show we are right,” she said.

France’s entertainment industry has seen divisions over the Me Too movement, with Catherine Deneuve notably saying it had gone too far.

No one at the Cesars publicly said anything similar.

The ceremony’s president, Vanessa Paradis, set the tone by opening the show saying: “I am wearing this white ribbon for the fight against violence against women.”

French film stars including Juliet Binoche called in a proposal in the newspaper Le Monde on Friday for quotas to guarantee that more government film subsidies go to movies directed by women.

The ceremony was dedicated to Jeanne Moreau, the smoky-voiced femme fatale of the French New Wave who died last year, known for her distinctive blend of sensuality, intellect and resolve.