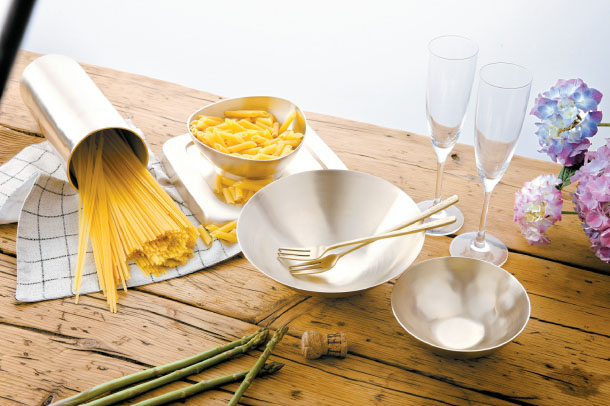 With more attention falling on cooking at home or how to better introduce Korean food to foreigners, brassware has become a popular choice.

The love of brassware seems to have grown thanks to the popular TV program “Youn’s Kitchen 2,” where Korean celebrities cook for locals on Tenerife island in Spain. Those who watched the show have been heading out to buy brassware, known as notgeureut or yugi in Korean, to put into their homes. The sales of some dishes made by Notdam have more than tripled at some department stores.

Although the show increased the popularity of the light gold dishware, the trend of using brassware seems to have started early last year. You can find around 5,200 posts under the hashtag “yugi”, and more than 4,500 pictures of notgeureut on Instagram. The tableware, commonly used for weddings and traditional holidays, has found a way to become a daily household item.

Its charm is easy to see in person. The brassware plates give off a golden gleam from their subtle glossy surface. In the last year, the distinct color has attracted global fashion houses as well. Italian fashion brand Max Mara held an exhibition on coats at Dongdaemun Design Plaza last year, where it also unveiled a product inspired by traditional brassware. The gold-colored lining of the coat was inspired by notgeureut, said Ian Griffiths, the creative director of Max Mara who designed the coat.

Newly designed plates and bowls that go well with Western-style food and desserts such as pasta, salad, and cake have helped brassware appeal to a wider range of customers. Until recently, since the dishware was mostly used to serve food at ancestral rituals, there weren’t many designs to choose from.

These days, stores that sell brassware and cafes that use the distinct dishes to serve food are popping up throughout Seoul.

“I wanted to show people who think of the dishes exclusively for traditional rituals that there can be more variety,” said Kim Sun-young, who opened Noshi in Jongno, central Seoul, where she serves food on brass plates and bowls. The eatery also houses a gallery and a shop.

The work of many millennial designers have also contributed in making brassware popular. Furniture designer Song Seung-yong collaborated with artisan Lee Jong-Oh to create a cutlery collection called “La Lune” for home goods store Seoulbund. Park Chan-ho, CEO of Seoulbund, who arranged the collaboration said he couldn’t introduce brassware until recently because the designs were not very competitive. Designer Song took design motifs from the different shapes of the moon: the spoon was inspired by the full moon and the knife was inspired by a half-moon.

1. Dishes and cutlery made from brass, known as notgeureut or yugi in Korean. 2. A lacquered yugi plate made by Notdam. 3. A yugi bowl from the brand Noshi. 4. A brass bowl made by Notdam that was featured on the TV program “Youn’s Kitchen 2.”[NOTDAM, SEOULBUND]

Cho Ki-sang, CEO of the design group Fenomeno, has introduced brassware with different finishes. Some are glossy or matte while others have a lacquered surface. He also made smaller-sized dishes as he thinks people eat less rice these days than they did in the past.

His products are also lighter than those that are traditionally used, a welcome feature for those who shied away from brassware in the past because it was too heavy.

With the increasing number of new designs, younger people are becoming more interested in buying brassware for their own kitchens. They choose it to decorate their tabletops so that they can take a photo and upload it to social media.

“The trend of showing off one’s dining table has gained popularity thanks to the hashtag ‘onthetable,’” said Kim Ja-yeong, a dishware buyer for Hyundai Department Store’s living team.

“Modern brassware looks good serving not only Korean food but also fruit or desserts, so those in their 30s and 40s who want to differentiate [their style] are drawn to it as well.”

Greater exposure on social media has inspired others to head out to stores for a purchase.

“It looks like people have begun to [realize] that brassware isn’t outdated and boring, but a way they can decorate their table and [make it look] more modern,” said Ji Hee-jeong, manager of Notdam.

While people used to buy a whole set of brassware with different sizes of plates and bowls, younger customers go for individual pieces based on their needs, as buying a whole set is too expensive.

Prices differ depending on the brand, but on average, a spoon and chopsticks set ranges from 20,000 ($18.48) to 60,000 won. Small round plates start at 50,000 won and bowls that are big enough for serving rice dishes like bibimbap, or mixed rice, cost around 100,000 won. Buyer Kim Ja-yeong added that most popular choices among customers is cutlery and individual plates.

Although it comes with a hefty price tag, brassware has proven to be versatile and can be mixed and matched with all types of dishware in the kitchen.

“Brassware goes well with porcelin and glassware,” said food stylist Mun In-yeong. “Instead of only using brassware, you can make a more charming tabletop when you combine it with plates made out of other materials.”