How the panel of judges determines which vehicle takes the title

How the panel of judges determines which vehicle takes the title

The 14 cars that passed the first round of assessments for this year’s Car of the Year award are lined up at the Korea Automobile Testing and Research Institute’s circuit in Hwaseong, Gyeonggi, on Feb. 10 where a final round of evaluations took place. [JOONGANG ILBO]

HWASEONG, Gyeonggi - The final evaluation for this year’s Car of the Year (COTY) award took place at the Korea Automobile Testing and Research Institute’s circuit in Hwaseong, Gyeonggi, with 15 judges gathering last month to give their final opinion on the 14 cars that passed the first round of assessments.

According to Yu Ji-soo, head of the judging panel and currently the dean of Kookmin University, the extended evaluation period is necessary in order to examine every nook and cranny of the cars.

The judges evaluated various aspects of the cars, from aesthetics like the design of the interior and exterior, to performance, including an 840-meter U-shaped slalom course.

A slalom course is where a car needs to zig zag between cones to prove its agility. The test course included a range of different surfaces such as a washboard and even potholes. 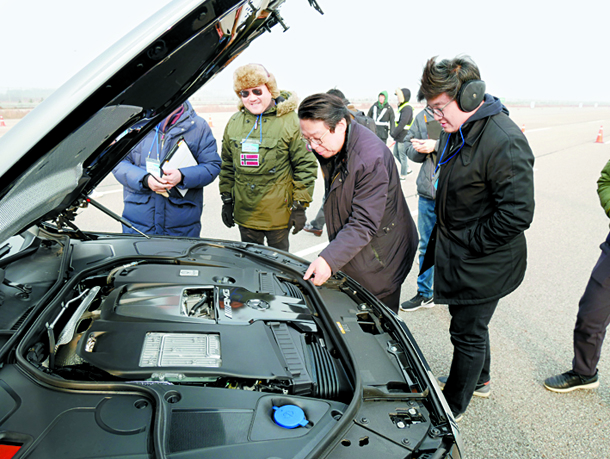 Experts take a look at a car’s engine. [JOONGANG ILBO]

The judging panel also drove the cars over 150 kilometers (93.2 miles) per hour to evaluate high-speed performance. Each course was also driven with safety functions switched off.

The judges tried to keep their opinions to themselves throughout the process to ensure the scores were objective, but occasionally if a car really surprised them they couldn’t hide their approval.

Kia’s Stinger, the winner of this year’s top award, was definitely the main topic of conversation once evaluations were finished.

Kim Dong-ryun, a researcher at Kumho Tire, who tested the oversteer function of the Stinger, said the car amplifies the fun of driving. Oversteer is when a car turns more sharply than expected, for example, because the road is slippery. 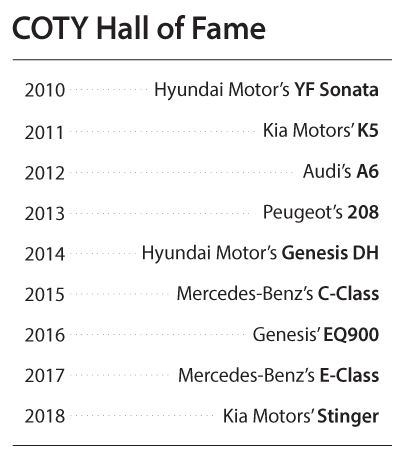 “The oversteering was nice and gentle,” said Kim. “The driver is in control of the car when it oversteers which boosts the fun of driving,” he added.

“The feeling of the car’s body being very close to the road surface when driving is similar to that of German vehicles,” Yang said. “The fact that it is able to take out the unnecessary bumpiness of the road also adds to its superb performance,” he added.

Yang said he would have prepared a compare and contrast test drive session between the Stinger and BMW’s 5 Series if he had worked for the Korean automaker.

The Genesis G70, the latest sedan released under Hyundai Motor’s premium brand, uses the same powertrain as the Stinger. The judging panel felt, however, that the two cars offer very different driving experiences.

“Although they used the same platform for the powertrain, the Stinger focused on maximizing the sportiness of the car while the G70 focused on offering a luxury driving feeling,” said Kim Ki-tae, a producer for AutoView, an automotive media platform.

“Being able to offer such distinctive features on the same powertrain proves that Hyundai Motor’s technology has come that far,” he added.

BMW’s 5-Series, which won the award in the comfort category, offered two completely different sides when driving on ordinary roads compared to driving on the track.

“When controlling the steering wheel on a straight course, the car felt like it responded slowly,” Kim Jae-woo from 3Secondz said.

“But when the car had to make a sharp turn, the car responded very quickly almost to the point where it felt like it was a sports sedan,” he added.

“The evaluation methods of COTY are professional and objective,” said Yu. “It therefore contributes to the overall development of Korea’s auto industry,” he added.