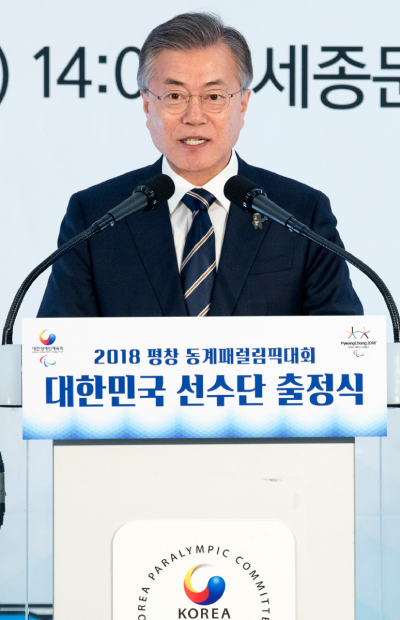 “All five heads of the ruling and opposition parties accepted Moon’s invitation,” said Han Byung-do, senior presidential secretary for political affairs. “They will have an in-depth discussion on issues concerning inter-Korean relations and peace on the Korean Peninsula.”

The Bareun Mirae Party, co-chaired by Park Joo-sun and Yoo Seong-min, will also send one of the two leaders to the meeting.

The meeting is scheduled to take place shortly after Moon’s special envoys return from North Korea. In addition to Han, three chiefs of the Blue House - Chief of Staff Im Jong-seok, Policy Chief Jang Ha-sung and Chief of the National Security Office Chung Eui-yong - will accompany Moon. Chung, who heads the presidential delegation to Pyongyang, will give a special briefing to the politicians.

Chung is scheduled to return from the North on Tuesday.

It is the first time that all leaders of the major parties accepted Moon’s invitation since he took office in May last year. Moon hosted meetings for party leaders in July and September, but Hong rejected the offers both times. Hong, defeated by Moon in the presidential election, has turned down Moon’s invitations, calling them as “an attempt for a political show.”

He apparently decided to join the meeting this time, as it is taking place at a sensitive time, which includes the North Korean leader’s sister, Kim Yo-jong, visiting the South last month and Moon’s dispatch of a special envoy in return.

The meeting is also taking place ahead of the June local elections and Moon’s push to amend the Constitution.

Last week, Hong told the Blue House that he would attend the meeting under three conditions. At the time, Hong said he wanted the luncheon to focus only on national security issues, to be a candid discussion and to be attended only by leaders of political parties that are large enough to be recognized as negotiation blocs. As of now, there are three such parties - the Democratic Party, Liberty Korea Party and Bareun Mirae Party.

But the Blue House said Moon still wants to include minority parties, and Hong replied Monday morning, accepting the invitation.