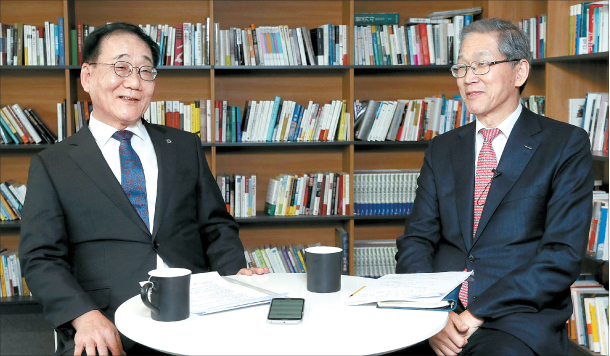 
Yonsei University in western Seoul and Pohang University of Science and Technology (Postech) in the North Gyeongsang city of Pohang announced Monday their decision to pool professors, facilities and research data, marking one of the first times two top-ranking Korean universities have reached such an agreement.

“It’s what I’d like to call a ‘brain-belt,’” said Yonsei University President Kim Yong-hak. “When Postech’s strong research in engineering meets Yonsei University’s cutting-edge medical research, we will be able to create something extraordinary in the biomedical field.”

“The growth of universities today will define the growth of the nation in the future,” said Postech President Kim Doh-yeon. “The competitiveness of universities has reached a saturation point. What we need right now is a breakthrough. There is a saying in African countries that goes, ‘If you want to go fast, go alone. If you want to far, go together.’ This is the essence of our new agreement.”

The two presidents announced on Monday the decision to pool the two universities’ intellectual, human and physical resources.

“Both universities have excellent dormitory facilities,” said Yonsei’s Kim. “The students of the two universities will be able to stay at each other’s facilities over summer breaks to attend classes there.”

The research in biomedical and smart city planning will be pooled between the two universities.

The universities said they will start pooling resources for the master’s students first before moving on to undergraduate programs.

“The best part of the agreement is that the students gain access to the best professors of both universities,” Postech’s Kim said. “The sharing of human resources became much easier with the speedy development of IT.”

There will be joint online classes as well, which the two presidents said will be open for students attending other universities.

“We need to do away with some backward policies at universities,” Kim said. “It is time to create a system where scholars throughout the country can share excellent lectures with all students.”

The universities also plan to install block-chain technology at both campuses, allowing students to pay for living costs with cryptocurrency.

“The block-chain technology will also allow the two universities to pool information about each other’s students, which means a Yonsei student could be issued a student ID card, participate in student elections and borrow books at Postech the same way he or she would be able to do on Yonsei campus,” Kim said. “Block chain technology allows decentralization of authority. So the two universities will be experimenting what technology can do before society does.”

“With increasing development in self-driving cars and drones, more people are concerned about the possibilities and consequences when such devices are hacked,” Yonsei’s Kim said. “Block-chain technology can thwart such hacking attempts. The two universities will also need a secure system to share research on biomedical and smart city and the block-chain technology may be able to provide a solution here.”

The two presidents added that part of the reason behind the agreement to pool resources is the dropping number of student enrollment.

“The number of students is dropping steadily yet the tuition level has remained frozen for 10 years,” Postech’s Kim said. “There is some serious dearth in education investment.”

“We feel threatened when we look at the staggering amounts of investment that countries like China and Israel are placing on education,” Yonsei’s Kim said. “Korean universities are very quickly falling behind other universities around the world.”

The Ministry of Education said 470,000 students are expected to enroll as freshmen in college in 2020, which falls short of the minimum number of students needed for normal financial management of universities, which is 485,318 according to the ministry.

Universities outside of Seoul have already started pooling resources with the decreasing number of students.

“With the drop in number of students and resulting drop in university income, it is natural for the quality of education to drop as well,” said Nam Ho-soo, head of the research and planning department of Dongseo University. “When universities start to cooperate and share resources, it can lessen the financial burden for all.”

“Think of it this way,” said Yonsei’s Kim. “Yonsei is the espresso coffee and Postech is the cream. When the two meet, you get a new taste that did not exist without the other. This is synergy. The partnership will be an addition to the general good of the society.”