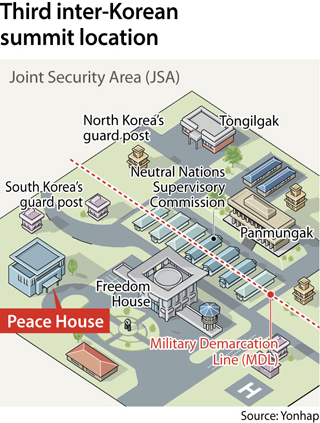 Kim Jong-un will become the first North Korean leader to cross the border and visit the South since the Korean War broke out in 1950, as Seoul and Pyongyang agreed to hold a summit in April on the southern side of the truce village of Panmunjom.

After a two-day trip to the North, which included a lengthy meeting and dinner with Kim, special envoy Chung Eui-yong announced Tuesday that an inter-Korean summit will take place at the Peace House in Panmunjom in late April. Chung also said a hotline will be established between Kim and South Korean President Moon Jae-in - and the two leaders will have their first conversation before the summit.

The April meeting will be the third summit between the two Koreas. South Korean Presidents Kim Dae-jung and Roh Moo-hyun met with Kim’s late father, Kim Jong-il, in June 2000 and October 2007. Both summits took place in Pyongyang.

“It is incredibly meaningful that the third summit will take place on the southern side of the Panmunjom,” Chung, head of the Blue House’s National Security Office, said.

When Kim sent his younger sister Kim Yo-jong as a special envoy to the Winter Olympics opening ceremony in February, she invited Moon to Pyongyang.

During a meeting with leaders of five major political parties Wednesday, Moon said the South presented various proposals for venues and the North chose the Peace House. He said Seoul told Pyongyang it didn’t want the summit to take place too close to June local elections, and late April was decided on.

Although it is located south of the military demarcation line, the Peace House is often considered a neutral area. Located on the southern side of the Joint Security Area of Panmunjom, it is a three-story building built for inter-Korean talks.

The North Korean leader’s decision to cross the inter-Korean border is seen as an attempt to promulgate a confident image. When North Korea’s media reported about the special envoys’ visit earlier this week, they said Kim had made an “audacious” decision.

It may also be an attempt to differentiate himself from his late father. Although two inter-Korean summits were held in Pyongyang, Kim Jong-il never visited Seoul in return.

When South Korean officials asked him to visit Seoul after the first 2000 summit, Kim replied, “Washington is the capital city of the United States, not New York,” several government officials said.

“He was saying that Seoul may be an economic center like New York, but Pyongyang is the heart of [Korean] politics and summits must take place in Pyongyang,” a South Korean official said.

After the summit in Panmunjom, Kim Jong-un may ask Moon to visit Pyongyang in return.

Moon promoted the idea of holding an inter-Korean summit in the early stage of his presidency because agreements made at the 2007 summit were not properly implemented because Roh’s presidency ended months later. Sources said Moon wants to hold summits on a regular basis, possibly including another one this year.

Although the location is fixed, the two Koreas still need to decide a date.

“The two sides discussed the general time frame and decided to fix the date in further contacts,” said a Seoul official.

In the past two cases, arranging an inter-Korean summit has taken months. On April 10, 2000, the government announced that President Kim Dae-jung would visit Pyongyang for three days starting June 12, 2000.

On Aug. 5, 2007, the government announced the second summit on Aug. 28, but it was delayed to Oct. 2 due to the heavy floods in the North. Before the announcements, the two Koreas had months of contacts to arrange the summits. If the third summit takes place on April 30, the two Koreas will have only 55 days to prepare.

“When the Roh administration was preparing for the second summit, it had the experience of the first summit to work with,” a former government official said. “But now, the North has a new leader and inter-Korean ties were severed for nine years. It will require far more effort.”

The Moon administration is hurrying because it wants to prolong the reconciliatory mood created with the Winter Olympic Games. “The United Nations adopted the Olympic Truce resolution, which will end one week after the Paralympics,” said a government official. “It will expire on March 25. We need to continue the mood, and the inter-Korean summit will be an option.”

The summit in April will take place during Korea-U.S. joint military exercises. The two countries delayed their annual joint exercises until after the Winter Olympics and Paralympics. Seoul and Washington are planning to start the Foal Eagle exercise on April 1 and Key Resolve exercise on April 23.

“A summit in April means that inter-Korean relations will keep up their momentum despite the exercises,” Chung said Wednesday, when he accompanied Moon to brief senior politicians. “The North said it no longer makes an issue out of the joint exercises, and that is also very important. We think it is an accomplishment that the timing was set for late April.”

“I was going to tell Kim that it is realistically impossible and there is no justification for us to stop or further delay the joint exercises,” Chung said. “But Kim already knew our position.”

Chung also said the North showed an understanding that the joint exercises are routine and defensive in their nature. Until now, the North has reacted sensitively to the exercises, calling them a rehearsal of an invasion of the North.

Analysts said Kim appeared to have changed his attitude. “The North seemed to decide that the military exercises are an issue to be resolved with the United States,” said Jeong Young-tae, head of the Institute of North Korean Studies.

“When inter-Korean relations are good, the North didn’t complain much about joint exercises,” said Cheong Seong-chang, head of the Department of Unification Strategy Studies at the Sejong Institute. “It seems that the North wants to demand the United States scale down the drills when progress is made in denuclearization and normalization of ties with the United States.”

But another expert from a state-run institute, who asked for anonymity, said Kim is pushing the South to make a bigger concession. “The government is now facing pressure to shorten the period or scale down the exercises,” he said.