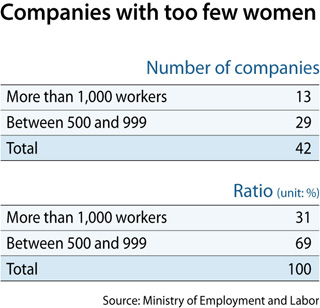 More than 40 companies including Orion Confectionery, Haitai Confectionery & Foods and Posco ICT failed to meet the average proportion of female workers in their industries, according to the Ministry of Employment and Labor on Thursday.

The ministry’s report was released on International Women’s Day and was the second year the Korean government named and shamed businesses overly passive in diversifying their workforces in terms of gender.

The named companies will face disadvantages when selling to the Public Procurement Agency, a state-run organization responsible for procuring commodities.

“The listed companies will receive lower scores when the Public Procurement Agency assesses their qualifications,” said Lim Seo-jeong, a director at the employment policy division at the Labor Ministry.

Lim added that the ministry will encourage big companies to take a leading role in reducing gender discrimination in the workplace.

The 42 companies named have had less than 70 percent of the average female workforce rate compared to other companies in their industries for three consecutive years. The Labor Ministry said they failed to comply with ministry requests to increase the proportion of women workers.

Also on the list are Kyowon, an educational content producer, and financial companies Eugene Investment & Securities and Aju Capital.

Smaller companies tend to be more reluctant to employ women. Some 69 percent of the named companies have less than 1,000 workers.

By sector, companies that support administrative operations for corporate clients took up the largest portion with 21.4 percent, followed by manufacturers with 14.3 percent.

Last year, 27 companies made it on the list including one government-owned company. This year, all 42 companies were in the private sector.

More men are taking leave from work to attend to child raising because their wives also work. In 2012 there were 1,790 men that took a break from work, which grew six times to 12,043 last year.