IOC president is made honorary citizen of Seoul

IOC president is made honorary citizen of Seoul 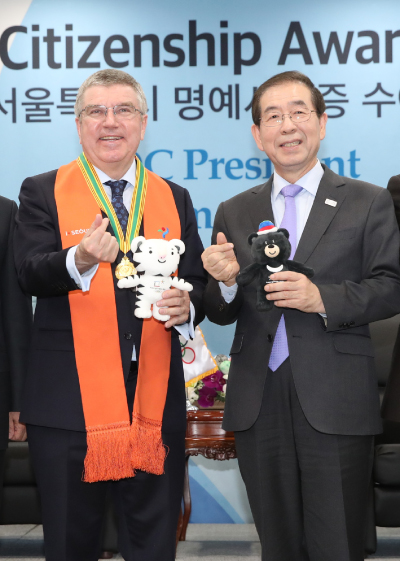 “We are still talking about the convenient date for such a visit,” Bach said at the Seoul City Hall after he was awarded honorary citizenship of Seoul by Mayor Park Won-soon. “Our cooperation with the NOC [National Olympic Committee] of the Democratic People’s Republic of Korea is continuing, like with all of the other 206 national Olympic committees. We are continuing to support the athletes and the national Olympic committee while always respecting, of course, the UN sanctions [on the North].”

The Democratic People’s Republic of Korea is the North’s official name.

In the visit to the North, the IOC will likely discuss North Korean participation at the upcoming Olympics, including the 2020 Tokyo Summer Olympics and 2022 Beijing Winter Olympics.

“The talks would be strictly related to Olympic matters,” he said, “the cooperation with the [North’s] national Olympic committee and their preparation for the Olympic Games at Tokyo, for athletes from DPRK would of course play a major role, but it would also go beyond…for the Winter Games in Beijing in 2022, and it would concern how to shape the overall cooperation considering the UN sanctions which the IOC has always respected and will always respect.”

Bach praised the inter-Korean dialogue that took place through the Olympics, saying, “I would like to congratulate the two governments for using this Olympic momentum to drive talks forward on a political level. When the athletes of the Republic of Korea and the Democratic Republic of Korea marched as one team at the opening ceremony behind one flag, this sent a powerful message of peace from Korea to the world.”