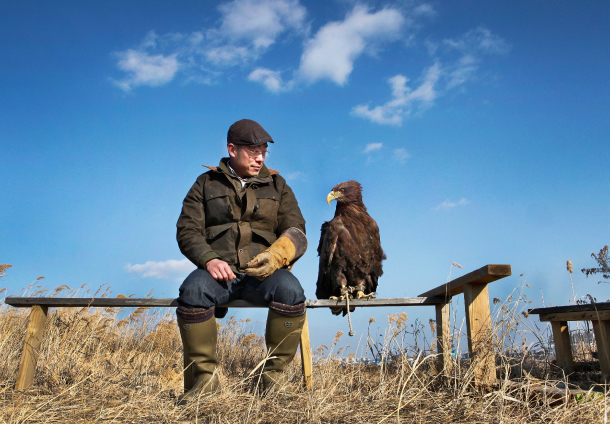 Bird trainer Park Sang-hyun sits with Garam, a white-tailed sea eagle which was trained by Park after it was shot. [PARK SANG-MOON]

What has helped Korea develop its diverse culture are the people who have spent years mastering one skill. These ordinary people with extraordinary talents are the focus of the new photo book “Humans of Korea.” Photographer Park Sang-moon, who runs a series of photo stories for the Korea JoongAng Daily has put together his work, hoping to capture the true essence of the masters at work.

“As I meet masters who are specialized in their industries, I also get inspired to become a master of photography and exercise all my energy,” said Park who put together photos that he has taken over the course of almost 10 years. “The passion of these people leads me to become more enthused about taking shots, and even forces me to come back multiple times to get the perfect shot.”

Many of the shots were taken while he was searching for stories to write for his photo series “Zoom Korea.” About 250 cuts have been chosen to show different charms the Korean culture has grown through many of local talents. The 40 experts are divided into four different categories: Those who try to hand down the past to the present; those who work through slow routines to earn the title of master; those who focus on environmental sustainability; and those who create new trends from the existing culture. Each category has 10 experts featured with stories of what Park saw and felt while he worked with them and took their photographs.

One artist who Park couldn’t resist capturing was craftsman Kim Young-jun, known for his lacquerware works. The craft was found in the design of many homes in the past, but it has lost its popularity in mainstream design these days. Kim, who spent most of his 20s and 30s as a financial analyst, chose to change his career completely, and fell for lacquerware that included mother-of-pearl touches, with the thinking that adding traditional flourishes to modern-style architecture would attract consumers. After years of study and practice making products with jagae, the Korean term for mother-of-pearl, Kim gained international attention for his products. Global tech giant Bill Gates bought his pieces and soon after Microsoft requested that Kim make an X-Box game console using mother-of-pearl designs. Kim even created a piece inspired by the recent PyeongChang Winter Olympic Games. This piece is shaped like the Olympic Flag and was displayed in Gangneung during the international sporting event.

“I like his work because he always questions the status quo and tries to think of new ideas and new ways to approach things,” said Park, saying that the artist inspired him to come back to his studio even after his scheduled visit to try and get better shots. “While he is serious when he works, he is very down-to-earth, and I wanted to show that character in my photos.” 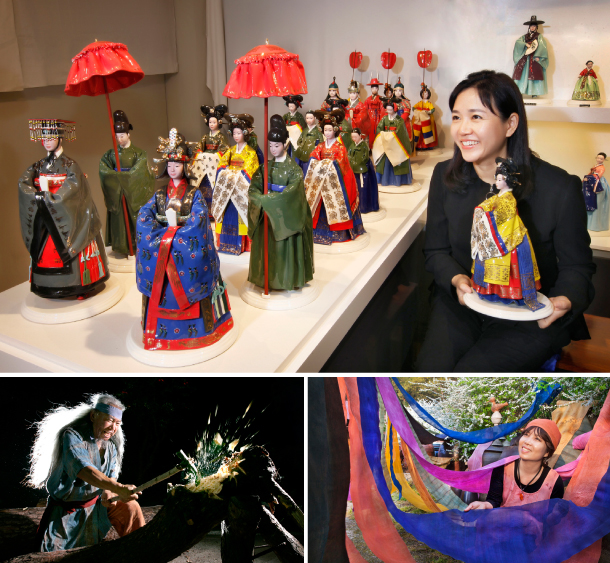 While Kim is a master of pushing himself to the limit in order to make art others can appreciate, bird trainer Park Sang-hyun got on photographer Park’s radar for his efforts to connect humans with nature. A rehabilitation therapist for birds of prey, he works with injured birds such as eagles in order to help them return to their natural habitats. The photographer met the bird expert while he was training Garam, a white-tailed sea eagle who had been shot.

Park’s search for these talents had also helped some of the experts gain some exposure. Porcelain artisan Oh Joo-hyun, who makes standing dolls, got the chance to display her works at the new Terminal 2 at Incheon International Airport after officials saw her works featured in the newspaper and contacted her.

Park is inspired by “these passionate people because they work not just for their own benefit, but for their neighbors and the society they live in.” 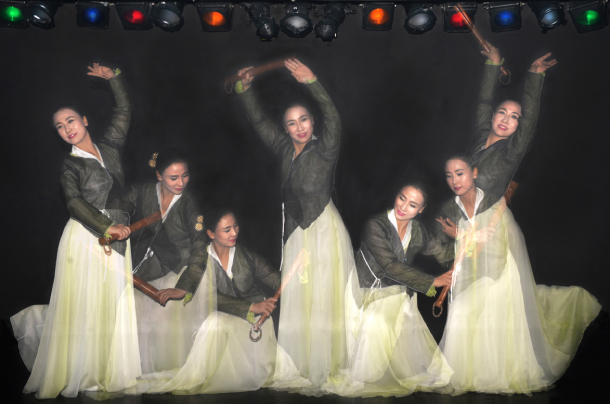 Dancer Song Min-suk, who dances with jukbi, a tool used in Buddhist temples, will perform at the event on Saturday. [PARK SANG-MOON]

Celebrate ‘Humans of Korea’ through performance


To celebrate the release of “Humans of Korea,” author and photographer Park Sang-moon has set up a chance for readers to meet some of the experts featured in the book.

At a book launch event on Saturday, from 3 to 6 p.m. at Yesultong, a venue for performances and exhibitions, in Jung district, central Seoul, about 10 experts who have been photographed by Park will present their talents.

Dancer Song Min-suk, a jukbi dancer, will show how elegant her movement can be. Jukbi is a tool used in Buddhist temples during meditation and she has developed many different versions of the dance.

Calligrapher Ha Sang-ho will have a writing performance while craftsman Kim Jong-heung will demonstrate how to carve wood to make jangseung, traditional wooden totem poles. Yu Ji-suk, a master of seodosori, or folk songs from now-North Korean territory Hwanghae and Pyeongan regions, will perform as well.

“Since many of the featured experts are known in their respective industries, they also wanted a chance to meet with one another and that’s why so many thankfully decided to come,” said Park.

The event is free and open to the public. To get to the venue, go to Chungmuro Station, line No. 3, exit 4.