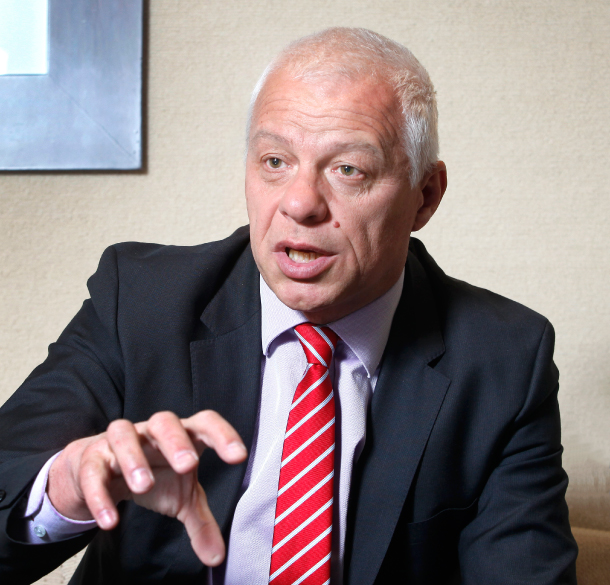 Drago Kos, chair of the OECD Working Group on Bribery, speaks with the Korea JoongAng Daily on the sidelines of the Fair Player Club Summit on Wednesday at the Grand Hyatt Seoul. [PARK SANG-MOON]

Kos is an established anticorruption expert and current chair of the Organization for Economic Cooperation and Development (OECD) Working Group on Bribery. He has been following the monumental case involving President Park and the business tycoons who bribed her.

“The fact that top politicians are corrupt - it happens in all countries of the world,” Kos said Wednesday in an interview with the Korea JoongAng Daily on the sidelines of an anticorruption forum in Seoul. “What happened afterwards has proven that Korea is not only ready but also willing to deal with corruption of top politicians.”

Kos said his working group will monitor the court proceedings against Samsung heir Lee Jae-yong, who was recently freed from jail by an appeals court that suspended his sentence on bribery charges. The group plans to raise questions on the reasons for the suspended sentence in its next report on Korea.

Kos is a Slovenian national who built up most of his career fighting corruption. He was president of the Council of Europe’s Group of States Against Corruption for eight years until 2011 and served as the first elected president of the Commission for the Prevention of Corruption in the Republic of Slovenia from 2004 through 2010. Before, he worked as a football referee, an experience that Kos said helped him develop a knack for quick but proper decision making.

Kos spoke with the Korea JoongAng Daily at the Grand Hyatt Seoul on the sidelines of the Fair Player Club Summit hosted by the UN Global Compact Network Korea, an organization that encourages businesses to adopt sustainable and socially responsible policies. He said that while most Koreans still underestimate the level of corruption in the country, he believes society is growing more aware of the problem. Below are edited excerpts from the interview.

Q. You seem very optimistic about Korea’s moves on anticorruption despite the recent cases that took place in Korea.

A. I have visited Korea several times. It’s improving. Before the event of your former president, already then Korea was doing fine. But what was missing was this general sensitivity and attitude of population against corruption, which is present now. This is something which you don’t meet in all places of the world. This is an asset which not all governments have. Not all countries in the world would react in such way.

Much of international research is research on perception, so not on the factual situation but on what people think about the stage of corruption in their countries. The Corruption Perception Index is a typical misperception. You have to know that perception only shows the level of sensitivity of the population, which in Korea is extremely high obviously.

According to similar research, people in Korea have an extremely bad opinion on what is going on in Korea. Fifty percent of Korean people think the level of corruption in Korea has increased, and 76 percent of Korean people - which is the biggest percentage of all countries in the Asia-Pacific - think that the government is not doing enough in the fight against corruption.

Without any doubt, this is the consequence of what happened in 2016 with the former president, because if you take a look at the concrete data, not perception, the data shows that in 2016, three percent of the Korean population paid bribes. Three percent is better than Australia with four percent, and much better than China, where they have 26 percent of people paying bribes. But of course a little bit worse than Japan with 0.2 percent. This is according to another research by Transparency International.

Then how should we understand perception indexes?

I would just like to add that even if it is perception, which is very subjective, at some point in time, perception becomes an objective fact, too, so the Korean government now will have to use the fact that Korean citizens are extremely disappointed with what’s going on in this area.

When Samsung’s Lee Jae-yong was freed from jail earlier than expected, people again doubted the integrity of the key decision makers in the country.

It was not the government which freed the gentleman, it was the judiciary and I don’t have any doubt or reason to doubt the impartiality of the Korean judiciary. If it was an international bribery case, we and the OECD would for sure ask for the decision of the court to see what were the results for freeing him. But we cannot deal with it technically because this is not a foreign bribery case.

But for sure when [the working group] deals with Korea in the next phase of evaluation, we will ask some questions about why this happened. We also have our famous Article 5, which says that investigations of bribery cases must not be obstructed by different things including the identity of persons involved, which means we would like to see that the law always applies equally to everybody. So we would like to see [how the trials go] and we will ask questions.

Only if it is implemented in a proper way. I saw so many very good pieces of legislation in my life which remained just a piece of paper. So to adopt the law sometimes is very easy; the most important part comes afterwards - the implementation of the law. It is only up to Korean authorities if they will implement [the law] in a way as it is foreseen. Law which stays on paper does not bite.

Then what do you think is most necessary to actually change the business environment?

There is one common denominator: it is when the government really does something to fight corruption. Then things start to change. When I say “does something,” it means not only adopting the law but engaging resources. Implementation asks for resources in the form of time, dedication and also practical resources like money, and this doesn’t happen very often.

Do you have any good examples from abroad?

Botswana. It’s not one of our member states, but there are reasons for their quick improvement. First, how interested the government really was. Botswana was investing a significant amount of their budget to fight against corruption. And if you go at the Corruption Perception Index, you’ll see Botswana is really improving fast.

We have some other countries in our group where the investigative efforts are really advancing. France is the case. They have adopted a new law last year, which means a significant step forward if it will be implemented. Like I said, good law doesn’t mean that good law will always be implemented.

It must be difficult to look over all 44 member countries in the OECD Working Group on Bribery when each country has different problems.

I’m dealing with 44 member states, which sometimes have very different interests. You see, our 44 member states, they know exactly what they have to do. I’m happy when I see that investigations and prosecutions are happening and they are successful. I’ve been disappointed several times already especially when I saw that good initiatives in the group are not supported by all the groups for reasons which have nothing to do with the real fight against corruption.

What’s your major goal this year as chair of the OECD Working Group on Bribery?

Our final goal is to level the playing field for all companies of full countries in the world when they do business in the global market. When the group started, we had members which were having 80 percent of global gross domestic product and 90 percent of foreign direct investment.

Now with the rise of huge economies like China, India, Indonesia and many others [which are not members] this percentage is going down. So one of my priorities for the future is to try to increase the number of members in the group, especially countries which are extremely economically important in the world. It’s because we can only deal with countries which are our members.

Your early career involves being a football referee. Is that experience helping you with your current duties?

Yes, of course. As a referee, you face situations when you have to make quick decisions in a very short manner of time. This is sometimes my task in the working group, too - to make short, quick but proper decisions under pressure.

Do you have any final comments for our readers?

I do understand the frustration of the Korean population. But this situation in Korea is not much worse than in any other developed countries. You have great potential, which you have to use and you are using it already.


About the OECD Working Group on Bribery
Established in 1994, the group is responsible for monitoring the implementation and enforcement of the OECD Anti-Bribery Convention, which includes legally binding standards to criminalize bribery of foreign public officials in international business transactions. The group consists of 35 OECD countries and nine non-OECD countries which are Argentina, Brazil, Bulgaria, Colombia, Costa Rica, Lithuania, Peru, Russia and South Africa.