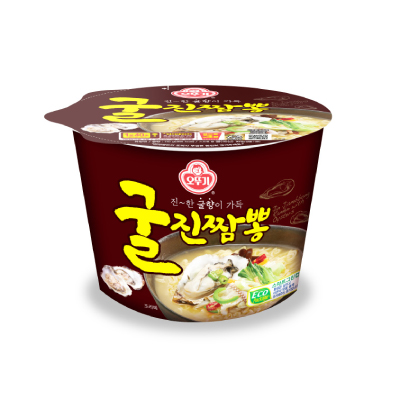 Ottogi’s Oyster Jin Jjambbong is a cup noodle with deep oyster notes that can be cooked in a microwave. [OTTOGI]

Ottogi launched Oyster Jin Jjambbong, a cup noodle with heavy notes of oyster, last November, and it has taken Korea by storm, recording sales of over 10 billion won ($9.4 million).

The cup noodle’s popularity especially took off after Hwang Jung-min, a popular actor, appeared in a television spot for the product, and people have been raving about it on social media.

The soup is made with stir-fried oyster extract and chicken soup, creating a rich jjambbong taste that one might find at a Chinese restaurant. To enhance the flavor with an original spicy kick, Ottogi added a vegetable oil made from garlic and onion extract.

Oyster Jin Jjambbong is easy to cook and can be enjoyed in a short amount of time.

Just pour hot water and heat it in a microwave for one and a half minutes. Or just let it soak in boiling water for three minutes.

Ottogi first launched a microwave-safe cup noodle, called Odongtong Noodle, in 2009 and has since expanded the line to Jin Ramen, Chamke Ramen and Real Cheese Ramen.