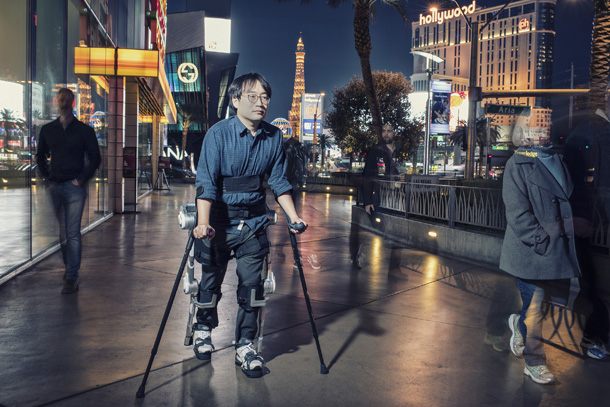 For an able-bodied person, it takes less than 10 minutes to transfer from line No. 2 to line No. 6 at Sindang Station, one of the biggest transit points in Seoul.

For a person in a wheelchair, it takes up to 40.

The corridor at Sindang Station is long. It contains a lot of stairs and not enough ramps or elevators to help those using a wheelchair move on their own. During rush hour, the commute is a nightmare.

“Most subway stations in Korea were designed without mobility disabled people in the picture,” said Hong Yun-hui, founder and head of Muui, a nonprofit that provides transit information for people with physical impairments.

To point out one problem, “because Seoul’s subways are operated by more than two organizations, the signs are inconsistently placed,” she said. “There are even blind spots in stations where there are no signs at all. It is impossible for people with an impairment to even bother to use the subway relying on these signs.”

Last year, Muui released a service that gives passengers the easiest transfer routes in select subway stations. The app can tell users which subway car is closest to the elevator and which corridors have more ramps. The nonprofit started with 14 stations and expanded the service to 33 this year. Volunteers collect the information by actually wandering the stations in wheelchairs.

“We have to consider everything from the perspective of those who move around in wheelchairs,” Hong said. “Even if there’s a sign, it is not useful for the mobility disabled because they cannot see them.”

Hong started Muui because of her daughter, who is unable to walk due to neuroblastoma. She believes people with disabilities should venture out and raise awareness of their experiences, but the infrastructure and technology in Korea is far from sufficient.

According to the Ministry of Land, Infrastructure and Transport, one out of four people in Korea face difficulties getting around on their own. Ten percent of that population has limited mobility because of conditions inherited at birth or wrought by a tragic accident. That adds up to about 1.2 million people in a country of 50 million.

Perceptions of people with disabilities cannot change overnight, but technology and services can.

“With the help of electronic wheelchairs and computer-assistive equipment, I was able to study and participate in society again,” Kim Jong-bae, an associate professor of occupational therapy at Yonsei University, told the Korea JoongAng Daily.

An accident in graduate school paralyzed Kim from the neck down, but he was later able to study rehabilitation engineering in the United States with the aid of diverse technology and equipment.

“I severely felt the importance of rehabilitation engineering and how it is vital for disabled people to live independent lives,” he said. 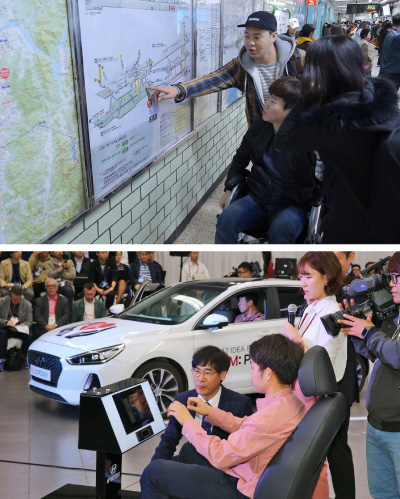 Top: Volunteers from Muui explore the Seoul subway in wheelchairs to collect information on accessibility. Bottom: A researcher from Sympony, a team of in-house researchers at Hyundai, demonstrate a system that visualizes sound. [MUUI, HYUNDAI MOTOR]

Hong Yun-hui believes in the positive effect of technology for people with physical impairments, but she also says it does not have to be expensive or sophisticated.

“Very, very small changes can entirely change how disabled people move around outside,” she said.

Todo Works is a Korean start-up that provides kits to turn manual wheelchairs into electric ones.

“I witnessed my daughter’s friend struggling with a foldable wheelchair, so I made a motor in about six months that let her more easily move around,” said Shim Jae-shin, founder and CEO of Todo Works. “I received more than 200 calls from parents of mobility disabled children to make the same motor for them after this one-time product.”

The motor weighs about 4.5 kilograms (10 pounds) and coupled with a foldable wheelchair - which can weigh anywhere from 15 to 20 kilograms - the contraption is lighter than an electric wheelchair, which can easily exceed 100 kilograms.

Shim said the kit, called Todo Drive, represents a “midway technology” that resolves an immediate inconvenience until a more complete solution is developed. The motor can drive a wheelchair about 10 kilometers on one charge.

“It is a rather simple task for the manufacturer to make these kinds of products,” Shim said. “But for disabled people, these simple products change their entire lives. The most frequent feedback I hear from parents is that the personality of their disabled children has changed to become brighter and more positive.”

The company remodeled its Carnival van and Ray box car with a ramp in the trunk so that wheelchair-bound people can easily get in and out of the car. The modified cars and other products posted 2 billion won in sales in 2011 and went up to 7.7 billion won last year.

Easy Move also designed a wheelchair for children that resembles a baby stroller. “Most of the wheelchairs sold in Korea are made for adults,” an official from Easy Move said. “But children who are unable to walk also need to use wheelchairs instead of just settling for a baby carriage because that option is not safe” since they were not designed for children with disabilities. 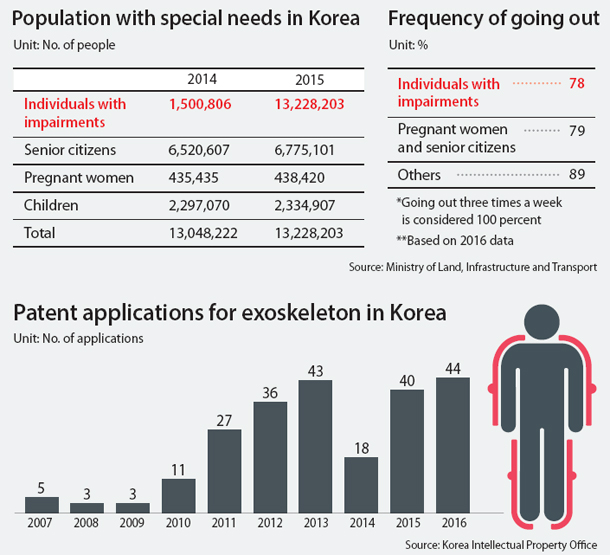 Hyundai Motor has given its researchers opportunities to come up with novel ideas that help the disabled population. Last year, it held an R&D festival where a team called Sympony took first prize for creating a system that turns sound into visible colors in a car’s front window to help the hard of hearing easily identify police or ambulance sirens.

One of them, called H-MEX (Hyundai Medical Exoskeleton), allows people with lower spinal cord injuries to walk. Paraplegics can sit, stand and even walk up and down stairs by controlling the legs with a joystick.

The exoskeleton market is expected to exceed $3.4 billion by 2024, according to Global Market Insights, and research on the technology is rising in Korea. The number of patents related to exoskeletons filed in the Korea Intellectual Property Office hit a record high of 44 last year compared to just 11 in 2010. Hyundai Motor and Daewoo Shipbuilding & Marine Engineering filed the most patents between 2007 and 2016.

Such futuristic technology, however, has a long way to go in practically helping people with physical impairments. “Most of the robotic equipment being developed today cannot be worn or taken off by disabled people on their own,” said Prof. Kim Jong-bae at Yonsei University. “I wonder if they can be really called a practical invention for the disabled.”

Accessibility is also a problem. “People with impairments are generally not financially affluent,” said Shim Jae-shin of Todo Works. “It is critical to develop something that can be used right away, which is what we are doing.”

“We already experienced information gap problem when the internet and PCs first emerged,” Professor Kim said. “If technology of the so-called fourth industrial revolution doesn’t consider accessibility among the disabled population, it will end in a serious ‘technology gap.’”