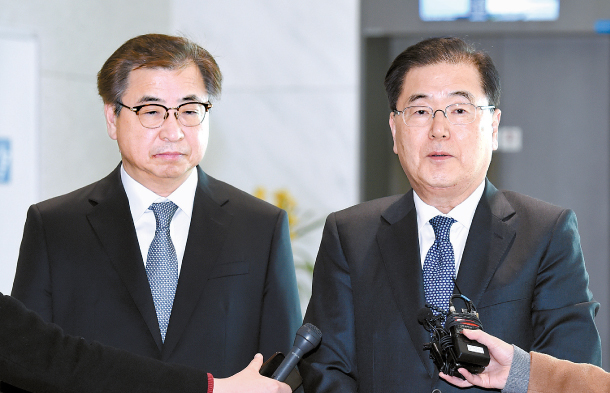 “Kim expressed willingness for denuclearization, which includes not only a nuclear freeze but also dismantlement,” said one source familiar with the talks. “Now is the moment where we have to wait and see if the North will actually start the process of dismantling its nuclear program.”

The delegation met with Kim on Monday and made several agreements, including an inter-Korean summit in April and moratorium on nuclear and missile tests during talks with the United States.

After the meeting, Chung and Suh Hoon, director of the National Intelligence Service, visited Washington and met with U.S. President Donald Trump to deliver Kim’s message, which included a proposal to meet with Trump. Trump accepted the invitation for talks about denuclearization and said he would meet Kim by May.

Kim’s message of denuclearization was also briefed to the Trump administration, another government source said.

“The briefing to the White House included Kim’s promise that he was willing to commit to the denuclearization that the United States wants,” the source said.

The official recounted that Trump initially called for a meeting with Kim right away. But after prodding from the South Korean delegation, he was persuaded to meet with Kim in May after the South could confirm the North’s commitment to denuclearization during the inter-Korean summit in April.

The United States and international community, including South Korea, have long demanded a complete, verifiable and irreversible dismantlement of the North’s nuclear arms programs. Kim’s message shows that he is seeking a summit with Trump for a larger deal.

Speculation was once high that Kim might discuss suspending additional development of the country’s weapons program while winning official recognition as a nuclear state. The reference to dismantlement, though, shows that Kim is willing to give up his nuclear program in return for regime security, including the formation of diplomatic relations with the United States.

“Taking into account the outcome of the special envoys’ trip to Pyongyang, the North’s goal is forming diplomatic ties with the United States before the end of this year,” another South Korean government source said. “If the North-U.S. summit takes place in May, there will be astounding changes in the geopolitics of the Korean Peninsula.”

Over the weekend, Trump continued to promote his decision to meet with Kim. “Who knows what’s going to happen?” Trump said in a rally in Pennsylvania on Saturday, where he endorsed a Republican candidate for next week’s congressional special election. “I may leave fast or we may sit down and make the greatest deal for the world.”

Riffing off the incredulity of the latest developments, Trump continued, “A lot of people thought we were going to go to war and then all of a sudden they come and say ‘We’re going to have a meeting and there’s no more missiles going off and they want to denuclearize.’ Nobody had heard that. But they said they are thinking about that.”

After Chung announced that Kim had extended an invitation for a summit with the United States and Trump accepted, the White House suggested preconditions for the meeting, which would be the first of its kind. “We’d have to see concrete and verifiable actions take place” before the summit, Sarah Huckabee Sanders, the White House press secretary, said Friday.

An official from the U.S. National Security Council, however, told the JoongAng Ilbo that there would be no new preconditions for the North-U.S. summit.

The source said Kim, through the South Korean delegation, told Trump that he would put efforts toward denuclearization, refrain from nuclear and missile tests and understands the decision of the South and United States to continue routine joint military exercises. He said Kim also expressed his desire to meet with Trump as soon as possible, and Trump accepted the invitation based on the messages.

He interpreted Sanders’ remark as an assertion that Kim stick to his denuclearization promise and not conduct nuclear and missile tests until the summit takes place.

The official, however, refused to elaborate on Kim’s message to Trump concerning topics other than the summit proposal. A senior Seoul official said Saturday that Chung had delivered an additional message from Kim to Trump that was unrelated to the summit invitation.

“It was to build trust for the summit, and it is something not directly related to denuclearization,” the source said. “After listening to this, Trump showed a very positive response.”

Speculation is high that Kim might have promised the release of three Korean-Americans detained in the North in order to facilitate the summit. Asked if Kim’s offer was about the release of the detainees, the U.S. National Security Council source refused to give a definite answer. He only said Trump accepted the invitation based on the expectation that the North would act on the promises it delivered through the South.

Chung and Suh returned to South Korea Sunday afternoon, wrapping up a trip to the United States that included a meeting with Trump, other senior officials including White House National Security Adviser H.R. McMaster and top experts in Washington.

“Because of the nation’s support, the inter-Korean summit in late April was successfully arranged and the North-U.S. summit will likely take place,” Chung said at Incheon International Airport shortly after his arrival. “I want to take this opportunity to express my respect to President Moon and President Trump’s strong determination and bold decision to accomplish the goal of the Korean Peninsula’s denuclearization and establishment of peace through this.

“I also highly evaluate North Korean State Affairs Commission Chairman Kim’s courageous decision,” Chung added. “We will do our best to make preparations for the success of the two upcoming summits.”

They then reported to Moon about their trip to the United States. Chung will depart for China on Monday and then visit Russia to brief them about the latest development. Suh will visit Japan on Monday.

China has already welcomed Trump’s acceptance of Kim’s invitation for a summit. President Xi Jinping talked to Trump on Friday in a phone call and supported the U.S. president’s decision to seek a political resolution to the Korean Peninsula issue. Russia also welcomed the latest development.

Japan, on the other hand, appeared baffled. Prime Minister Shinzo Abe said Friday that Washington and Tokyo remained committed to their maximum pressure campaign on Pyongyang to end its nuclear and missile programs.

While Moon and Kim have agreed to sit down at the southern side of the truce village of Panmunjom in late April, the United States will have to talk to the North on where and when to hold their historic summit.

The upcoming inter-Korean summit, the third of its kind, will take place at the House of Peace, where the 1953 Korean War armistice was signed.

Sweden, Switzerland, Beijing and Panmunjom were speculated as possible locations for a North-U.S. summit.

“Various venues are being talked about, and I believe Panmunjom is a strong candidate,” said a senior Blue House official. “The North and the United States will talk to each other. They will also consult with us about the venue and agendas, and we will offer our opinions.”

South Korean Foreign Minister Kang Kyung-wha will visit Washington on Friday to meet with State Secretary Rex Tillerson, and they are likely to discuss preparations for the North-U.S. summit.

A diplomatic source also said Moon’s meeting with Kim in April will serve as a stepping stone to fix the North-U.S. summit.