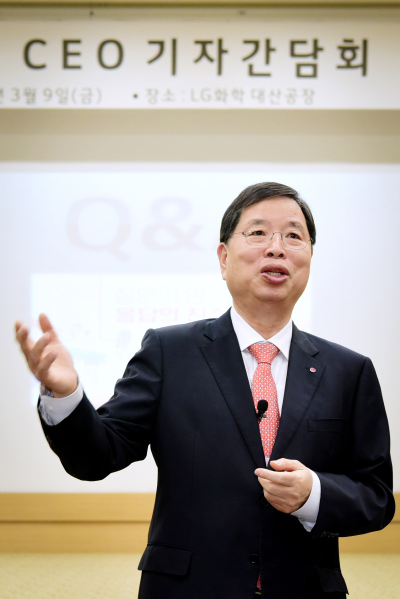 LG Chem announced an aggressive research and development investment plan with a goal of ramping up its revenue by 15 percent every year until 2020.

According to Vice Chairman Park Jin-soo of LG Chem at a press briefing Friday, the company hopes to record 26.9 trillion won ($25.2 billion) in revenue this year, then constantly ramp up its earnings to hit 36.4 trillion won in revenue by 2020.

The company also said it will take on 1,500 more workers, especially those with expertise in its future growth engine businesses like batteries and bio, this year. Last year the company hired 1,000 new employees.

“This year, we are injecting a record-high amount of investment into R&D and production facilities,” Park said. “With aggressive investment and the development of breakthrough technologies we will reach our growth target.”

Despite LG’s confidence, it is an ambitious sales target considering multinational chemical companies like U.S. Dow Chemical and Japanese Mitsubishi Chemical showed negative growth in sales from 2010 to 2016, according to data provided from Chemical & Engineering News, a weekly trade magazine published by the American Chemical Society.

“Some say our target is too great, but since our target has been set by our existing order backlogs we are quite confident of our goal,” Park said.

Park said half the increased revenue by 2020, about 5 trillion won, will come from battery businesses and the rest will be earned from other areas including basic materials and bio.

“I can’t reveal the exact list of our customers, but we have roughly 42 trillion won worth of battery orders on hand from about 30 companies as of last year,” Park said.

Though chemical businesses in Korea have been booming, Park said right now is a crucial time for LG Chem to bolster R&D.

“Chinese competitors have been chasing us at a threatening pace and we have to invest more in R&D to develop something hard to make, something our competitors cannot offer,” Park said.

While LG Chem has set electric car batteries, next-generation water treatment processing and bio as major future cash cow businesses, Park said it is the company’s goal to reach a break-even point for its car battery business this year.