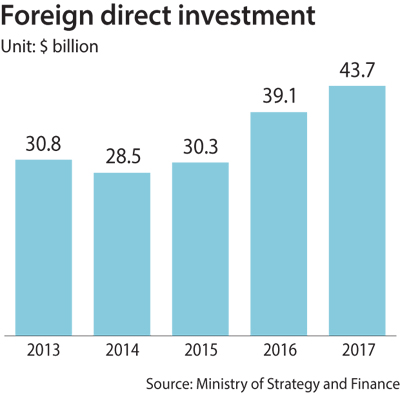 Foreign direct investment by Korean entities increased 11.8 percent between 2016 and 2017 to reach $43.7 billion. Money was heavily concentrated in finance and insurance, which accounted for 29 percent of total investment committed, followed by wholesale and retail with 22 percent and manufacturing with 18 percent.

Of note, investment in finance and insurance surged to an all-time high, growing 47.5 percent to $12.7 billion. Wholesale and retail investment rose 64.9 percent year on year to $9.56 billion.

Still, the largest overseas destination remains the United States, which accounted for 25 percent of all foreign direct investment committed by Koreans last year. The amount grew 12.8 percent year on year to $15.3 billion.

Investment to the Cayman Islands rose 11.6 percent to $4.98 billion. The tax haven was the second most popular destination for Korean investment, accounting for 11 percent.

China, on the other hand, saw investment fall 11.9 percent to $2.97 billion, while investment in Vietnam dropped 17.5 percent to $1.95 billion. Both countries are considered manufacturing powerhouses.

“Foreign direct investment is expected to maintain its current growth, considering asset management companies are increasing their investments in overseas assets in order to diversify their portfolios,” a Finance Ministry official said, “and considering M&As are active abroad as [Korean] companies are finding ways to expand to new markets overseas and securing advanced technologies.”