Finding work for people of all abilities

Finding work for people of all abilities 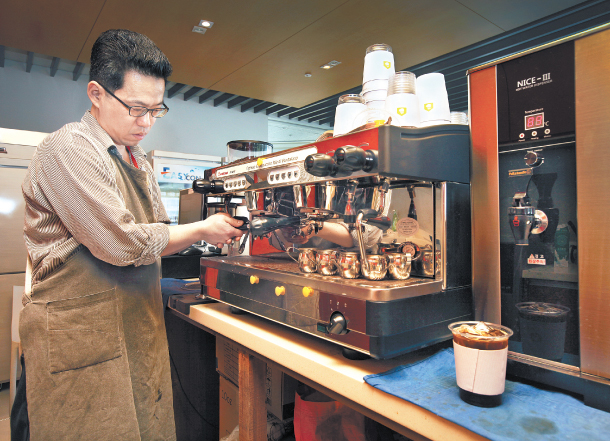 At Coffee JIA, a local roastery, workers with autism and other intellectual impairments are known as “supernatural hand-pickers.”

These employees are tasked with picking out burnt or broken coffee beans to offer customers the best brew possible. The job title was created by the company’s chief executive, Kim Hee-soo, to subvert common misconceptions about people with intellectual impairments.

“I hired many able-bodied part-time workers for the job, but they all left in less than a week because they couldn’t stand repetitive manual labor,” Kim told the Korea JoongAng Daily. “But our workers with developmental disorders can stay focused throughout their work hours.”

The idea of specifically hiring people with autism and other impairments did not cross Kim’s mind until a friend who taught at a special education school recommended it in 2012. By then, Kim had been running Coffee JIA for about a year.

She brought on two autistic workers, and for about six months, she tried different management strategies until she realized that the workers felt most comfortable with repeating a sequence of actions over and over again. Kim spent a month training them in hand-picking coffee beans, and now, the company is known for its quality roast.

“I found out that for people with developmental disorders, which is related to mental weakness rather than physical, it was harder to land a job compared to people with physical impairments,” Kim said.

“My hope is for other companies to see our case and see the possibility of what people with developmental disorders can do.”

“I hope other business operators can witness the kind of jobs people with developmental disorders can partake in and consider hiring them at their workplaces,” Kim said. 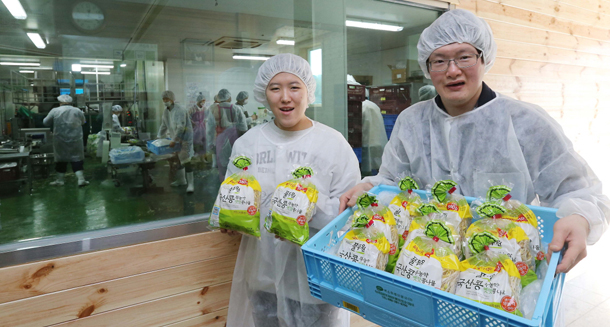 “General job offers just contain what kind of skill and talents the company needs, and able-bodied applicants usually build specs to fit that list of requirements,” said Jung Ji-yeon, managing consultant at Merry Year Social Company, a consulting firm for social enterprises. “But for people with impairments, a job or duty must be designed for them at companies so that workers are able to bring out their talent and potentials.”

There are many companies like Coffee JIA creating jobs that fit people’s different abilities.

Donggubat, a soap maker, was founded in 2014 with the aim of offering a quality work environment for people with intellectual impairments. The company makes soap with natural ingredients, and workers participate in either harvesting those ingredients or packaging the soap. The company believes gardening is a good way for people with intellectual impairments to socialize and make friends.

At Dot, a start-up that makes Braille smartwatches, a worker with a visual impairment tests the user interface and gathers feedback from the user community.

Among conglomerates, SK C&C, an IT services provider, is working with the Korea Employment Agency for the Disabled to come up with positions that people with various impairments can fill.

Through its IT Advanced Training project, SK C&C provided 23 people with eight months of training on computer languages, operating system development and database design last year. Among the trainees, 14 landed jobs or internships at IT companies such as Nautilus Hyosung. 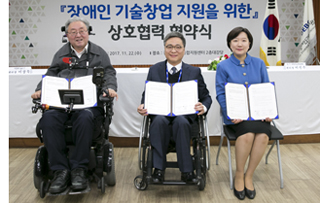 Lee Sang-mook, a professor at Seoul National University and head of the Quality of Life Technology Center, far left, and representatives from the Disabled Enterprise Business Center and KT commemorate the signing of a memorandum of understanding to help people with impairments start their own businesses. [KT]

Some large companies like Kakao and Samsung SDS have created subsidiaries specifically to hire people with various impairments. It’s a common way for conglomerates to make special hires because these subsidiaries can qualify for funding from the government if they meet hiring quotas. At least 30 percent of their workforce must be people with impairments, and workplaces must be equipped with appropriate amenities.

Linkage Lab, a subsidiary under Kakao, hired 10 people, including five with intellectual impairments, last October to perform phonetic transcription. Their task is to check whether voice data has been accurately converted to text. As the tech giant seeks to bolster its development of artificial intelligence technology, such jobs can contribute to increasing the accuracy of its voice-activated systems.

Linkage Lab said it hopes to find more duties catered to people with intellectual impairments in partnership with the Korea Employment Agency for the Disabled.

Samsung SDS, an IT services provider, also has a special subsidiary where 211 out of 226 workers have a significant impairment. At the subsidiary, Open Hands, over half of the work involves checking the quality of mobile apps, cloud services and other operations.

At a subsidiary set up by Samjong KPMG last month called Paran Happiness, five workers with various impairments and barista certificates will work in corporate cafes, while eight other workers will take part in the company’s printing business and four workers with visual impairments will offer an in-house massage service.

There are about 60 such subsidiaries being run by major conglomerates including Samsung Electronics, LG Electronics, Posco and SK Hynix. As of last year, 2,798 workers with impairments are employed at these companies.

Despite the efforts, people with different impairments still face difficulty finding jobs, and companies struggle to provide positions that suit their abilities.

According to data from the Ministry of Employment and Labor, Samsung Electronics paid the most penalties, 8.47 billion won, last year for failing to meet its government-mandated quota for people with impairments. Samsung was followed by SK Hynix and Korean Air.

Every company with 50 or more employees is obligated to have 2.9 percent of its workforce consist of people with impairments. Penalties are imposed if the quota is not fulfilled.

Experts in disability studies agree companies should hire more people with impairments, but simply throwing them into a hyper-competitive corporate environment is not enough.

“We have been training many people with impairments so they can land jobs at companies, but we saw that even after 10 people made it in, nine would end up quitting the company,” said Kim Won-hee, a researcher at Seoul National University. “It’s sometimes because of job applicants’ weaknesses but also some of the difficulties related to adapting to corporate culture.”

Kim leads a project at Seoul National University in partnership with KT and the government-run Disabled Enterprise Business Center that empowers people with impairments to start their own businesses. The university’s Quality of Life Technology Center, which runs the project, believes there is more chance of success when people with impairments start their own businesses either with family or friends.

To make that possible, the center plans to train people in IT skills. Afterward, KT will mentor them, and the Disabled Enterprise Business Center will offer financial support to help people open up their own businesses starting this year.

“If we can create a good model born from a joint cooperation among business, academia and government, I think many more movements can arise in the interest of creating a better working environment for people with impairments,” Kim said.