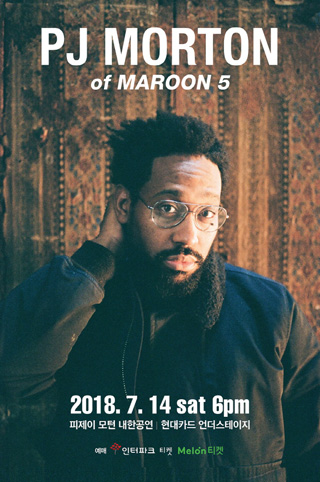 PJ Morton, the keyboardist of pop-rock band Maroon 5, will visit Seoul for a solo concert on July 14.

According to show organizer Papas E&M, PJ Morton will be performing songs from his album “Gumbo.”

Born in the New Orleans, the artist joined Maroon 5 as a tour member in 2010 and became their official keyboardist in 2012.

The artist released his solo debut album titled “New Orleans” in 2013, and it hit No. 9 on the Billboard R&B album chart. He received particular attention for his collaboration with famous artists like Stevie Wonder and Lil Wayne.

The R&B singer has been touring since June 2017, starting with shows in the United States and Europe.