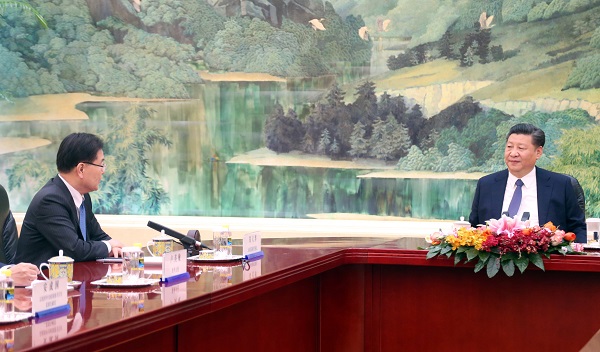 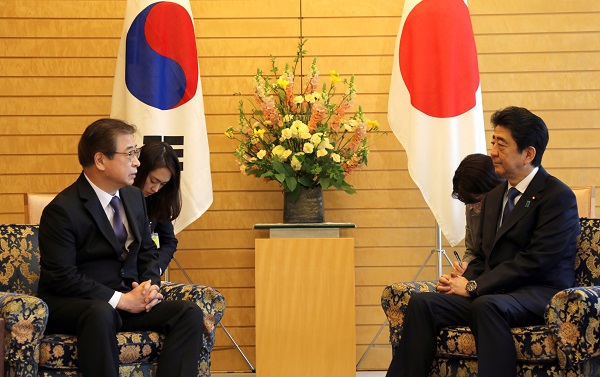 China and Japan expressed support for South Korea’s diplomatic campaign to engage North Korea with an inter-Korean summit and a summit between U.S. President Donald Trump and Kim Jong-un.

President Moon Jae-in sent Chung Eui-yong, head of the National Security Office, to China and Suh Hoon, director of the National Intelligence Service, to Japan on Monday after they returned from the United States, where they met with Trump and delivered Kim’s invitation to a North-U.S. summit.

The Japanese leader said Tuesday that he welcomes any dialogue premised on denuclearization of North Korea. “I believe it is extremely important that North Korea takes concrete actions to achieve what it has said,” Abe said at the beginning of his meeting with Suh.
Suh told Abe that it was extremely significant that Kim directly expressed an acceptance of denuclearization.

According to the Blue House, Abe also dismissed some concerns that Kim is trying to buy time with the summits to advance his nuclear and missile technologies. “Because North Korea is in a situation for bold deals as an inter-Korean summit and the North-U.S. summit will take place one after another, I don’t think the North will use this opportunity to buy time,” Abe was quoted as saying by the Blue House Tuesday.

According to the Blue House, Abe expressed his appreciation to Moon for sending Suh to offer details on the negotiations. The Japanese leader also said close cooperation among Seoul, Tokyo and Washington should be credited for the latest breakthrough.

Five special envoys of Moon, including Chung and Suh, met with Kim in Pyongyang on March 5 and returned with an agreement to hold an inter-Korean summit in late April. Kim also extended an invitation to Trump for a bilateral summit to discuss denuclearization, which Chung delivered to the White House last week. Trump immediately accepted the offer, agreeing to meet with Kim by May.

The Blue House said Abe asked Suh detailed questions about the North’s current position. The meeting was supposed to take 15 minutes but went on for an hour.

Abe also told Suh that Japan wants to resolve the issue of Japanese citizens abducted by the North along with nuclear and missile issues. He pledged strong cooperation with the South and the United States to resolve those issues.

In 2002, North Korea admitted that it had kidnapped 13 Japanese citizens in the 1970s and ’80s, and five of them and their families were returned. Tokyo, however, suspects that there are more victims.

If Japan insists on addressing the abduction issue in future talks with the North, it may cause a friction with Seoul and Washington, which want to concentrate on nuclear issues.

When Suh met with Japanese Foreign Minister Taro Kono on Monday, Kono asked if the abductee issue was discussed during the South Korean envoys’ trip to the North. “The meeting with Kim was to discuss larger issues such as the denuclearization of the Korean Peninsula and summits, and the abduction issue was not discussed,” Suh was quoted as telling Kono by Blue House spokesman Kim Eui-kyeom. “I believe it can be discussed in the future when Japan and the North negotiate substantial improvement of relations.”

According to Kim, Xi welcomed South Korea’s role in arranging talks between the North and the United States. “China and South Korea share stances on grand issues concerning the Korean Peninsula and the two countries will continue to closely cooperate in the future,” Xi said.

The Chinese leader said he wants the international community, including South Korea, to find a political resolution to the Korean Peninsula issues by adding proposals by each country to China’s proposal of a “parallel track” approach. China has pushed for holding parallel negotiations for the denuclearization of the Korean Peninsula and the replacement of the Korean armistice with a peace agreement.

According to Kim, Xi appreciated Moon’s decision to send Chung for the briefing. Chung also delivered Moon’s invitation for Xi to make a state visit to Korea.

Chung also told Xi that China’s stance that the North Korean nuclear crisis must be resolved primarily between the North and the United States contributed greatly to arranging the Kim-Trump summit.

Wrapping up his China trip, Chung left for Moscow on Tuesday. He is scheduled to return to Korea on Wednesday.

Russian Foreign Minister Sergey Lavrov plans to meet with Chung, according to Russia's TASS news agency. It remains to be seen if Chung will meet with Russian President Vladimir Putin, as the country is scheduled to hold a presidential election on Sunday.