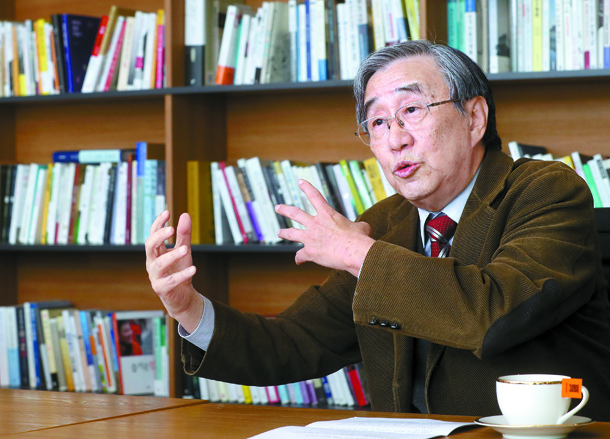 As Chinese President Xi Jinping moves to rule for life, international relations expert Suh Jin-young, a professor emeritus of Korea University, weighed in on the repercussions this may hold for the Korean Peninsula.

Suh sat for an interview with the JoongAng Ilbo, an affiliate of the Korea JoongAng Daily, last week in Seoul ahead of the historic vote Sunday by China’s rubber-stamp legislature. He pointed out that Xi may rule until 2035 as he pushes to develop China into the leading global power.

Xi would have had to step down in 2023, but he did not name a successor during the Communist Party Congress last October, defying tradition.

Weibo, China’s version of Twitter, banned terms such as “emperor” and “Yuan Shikai,” the first president of China, who made himself an emperor, as people posted critical messages on Xi’s move to prolong his rule.

Suh, a graduate of Korea University’s Department of Political Science and International Relations, went onto receive his master’s and doctorate degrees in political science at the University of Washington in the United States.

Suh said that Xi’s prolonged rule can have both advantages and disadvantages for Seoul, and pointed out that Xi’s initial policy on the Korean Peninsula has been a “failure.” He also said it is not likely that Xi will challenge the United States outright in a power struggle.

A. It is clear that a one-man system has been solidified and the door to long-term rule has been opened. However, he has not entered that door yet.


Xi entered his second term as president last October. Isn’t it too early to start attempting to prolong his presidency?


Is there a feeling that he is rushing things?

It is true that things are being rushed. The second and third plenary sessions of the Central Committee all happened within 40 days after the 19th Party Congress [held last October], when it would usually take place over the course of one year.


Do you mean that extending his powers was something that has been planned?

I think it is something that has been planned since he took power in November 2011. The start was when he set forward his extensive vision of a “Chinese Dream” as a political goal, which would require a long period of time to achieve. The Xi Jinping administration started off as a coalition of different factions including [former President] Jiang Zemin’s Shanghai clique and [former President] Hu Jintao’s Communist Youth League.

Xi, through his anticorruption campaign in his first term as president, nearly disintegrated these forces and filled their places with his people. An upheaval of the Chinese political trend, which changes in 10-year cycles, has taken place. The collective leadership system that Deng Xiaoping built 40 years ago has effectively become incapacitated and one-man rule is solidifying.


Isn’t the force with the greatest vested interests the Chinese Communist Party itself, which cannot be contained by anyone?

China is trying to resolve this issue through internal monitoring. A good example is the creation of a new National Supervisory Commission with the constitutional amendment. In the past, the Central Commission for Discipline and Inspection could only monitor the Communist Party members. Now, through the launch of the new commission, public servants that are not party members will also be covered and can be cracked down upon for corruption.


But while Xi is pushing for strong reform, isn’t his belief that he is indispensable a dangerous way of thinking?

In a complex and diverse society like China, there is a need for the political system to run in a flexible and resilient manner in order to resolve the side effects of compressed growth and various dilemmas. However, it seems that Xi thinks that Chinese society’s political capability is not up to speed to do so. Thus, he is trying to overcome the difficulty with the easiest, most effective and traditional method — relying on reform through the charisma of the top leader.


What sort of effect may a long-term presidency under Xi have on China?

It is a double-edged sword. In the short-run, efficacy would be an advantage. Reform can be driven through a strong, one-man rule, and there can be higher consistency and convergence of policies. However, in the long term, if the institutional transfer of power does not properly function, a power struggle can intensify and political tensions become heightened.


Xi has already crushed dissenters — what sort of power struggle will happen?

The greatest advantage of a democracy is the institutionalization of the exit of power. Because there is a mechanism for such a peaceful exit, stability can be maintained. A dictatorship is not like that.


Nobody knows how long Xi will stay in power.

Xi, during the 19th Party Congress, proposed a three-stage road map for the development of China through the mid-21st century, during which the 100th anniversary of the founding of the Chinese Communist Party will fall. The blueprint calls to build a moderately prosperous society by 2020, modernize the army by 2035 and turn China into a leading global power by 2050. There seems to be internal thought that Xi would need to stay in power until at least 2035 in order to achieve his Chinese Dream.


It seems like this would result in an even more intensified power struggle between the United States and China.

Xi Jinping’s move toward long-term rule has taken a hit on those arguing for Western-style modernization, so there are more people within the United States worried about China’s threat. But the United States and China will not immediately fall into the “Thucydides Trap” [when a rising power brews fear in an established power, escalating toward war] triggering an inevitable war over power. China’s grand strategy is not to seize power through a direct confrontation with the United States. China, as Michael Pillsbury [director of the Hudson Institute’s Center on Chinese Strategy] points out…has a plan to supplant the United States through a long-term marathon strategy.


What kind of effect will prolonged rule by Xi have on the Korean Peninsula?

Xi’s first Korean Peninsula policy was a failure. While he tried to establish influence on both South and North Korea through equidistant diplomacy, he was slapped in the face by North Korea and snubbed by the South. North Korea, despite China’s repeated warnings, acted on its own and conducted nuclear and missile tests, while South Korea deployed the Terminal High Altitude Area Defense (Thaad) system, which Xi expressed his opposition to three times. Xi and China lost face because of this.


How should we prepare for a long-run rule of a powerful Xi Jinping?

We need to prepare for both positive and negative scenarios. A positive one is where Xi conducts realistic politics, and there is great room for cooperation in the practical sense. To this end, there is a need for an assertive diplomacy in order to give China what it wants and also for us to receive what we need to receive. There is great leeway for us to carry out mediatory diplomacy between the United States and China.

In a negative sense, the path China walks differs from that of our liberal democracy, so it might be difficult for us to fundamentally go down the same path. There is a limitation to friendship.