A tale of two constitutions

A tale of two constitutions 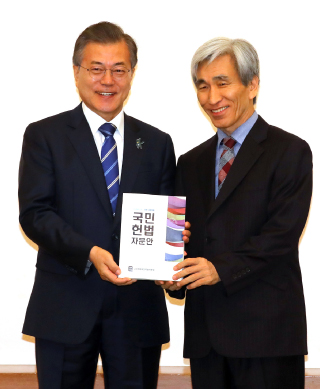 President Moon Jae-in, left, holds up a draft of his proposed constitutional amendments with Chung Hae-gu, chairman of an advisory committee on constitutional reform, at the Blue House Tuesday. [YONHAP]

Constitutional reform is the hot topic in Korea and China. The two countries with completely different political systems have coincidentally taken steps to revise their constitutions. Celebrating the 40th anniversary of reform and opening up, China reconsidered its 1982 Constitution. Korea’s 1987 Constitution, born after a democratization struggle calling for direct presidential elections, is due for a change.

The means and progress of revising the constitution in both countries have been as distinct as the political systems themselves. Based on a one-party system, China adopted an undemocratic and unilateral way beyond seeking efficiency in decision-making. By contrast, in Korea’s democratic system, inefficient and unproductive politicians have made passing a constitutional amendment difficult.

In China, the National People’s Congress passed the amendments, which included the removal of presidential term limits, with 99.8 percent approval on March 11, just five months after President Xi Jinping first raised the need for constitutional change at the Communist Party’s Politburo meeting on Sept. 29, 2017. It was an affirmation of China’s speedy politics.

In 1978, Deng Xiaoping drove out the Gang of Four — Jiang Qing, Zhang Chunqiao, Yao Wenyuan and Wang Hongwen — who were responsible for the Cultural Revolution and drafted the 1982 Constitution abolishing presidency for life and establishing two-term limits for key state leaders.

Xi has removed the New Gang of Four — Zhou Yongkang, Xu Caihou, Bo Xilai and Ling Jihua — and in 2018 he pushed for constitutional changes to reinforce his power. Deng and Xi have followed a surprisingly similar pattern.

After Deng established the 1982 Constitution, China attained the political stability allowing it to become the second-largest economy in the world. In one fell swoop, Xi tore down the framework that Deng established.

It is uncertain whether Xi’s choice will help realize his idea of the “Chinese dream” and revive the Chinese people or turn out to be poison. At present, many criticize the amendments as “regressive.”

Korea’s pursuit of constitutional amendments is disappointing. During the presidential campaign in May 2017, candidates on both sides agreed to the need for changes. A majority of the public also supported a revision.

Politicians have the duty and responsibility to realize the demands of the nation, but the opposition Liberty Korea Party has opposed a plan to hold a referendum on constitutional amendments during the upcoming elections in June, and the National Assembly is dragging its feet. The attitude of prioritizing party interests over citizens’ desire for change deserves criticism.

President Moon Jae-in did not earnestly pursue constitutional reform at the beginning of his administration to avoid political controversy. During his New Year’s address, he simply promised to consult the National Assembly on drafting amendments that reflect the public’s will. Then on March 13, he blamed the opposition party for delaying debates.

He is right, but he did not make enough effort to persuade the opposition. President Moon is set to propose a constitutional amendment on March 21. But because the Liberty Korea Party, the largest opposition party, is against it, passing the amendment in the National Assembly is realistically difficult.

Constitutional reform in Korea and China has largely dealt with presidential term limits. Xi removed them to stay in power. Moon is expected to include a plan that allows for two consecutive four-year terms, a change from the current single five-year term. I am not convinced of his reasoning for extending the Korean presidency when five former presidents, including Lee Myung-bak, have been summoned by prosecutors for investigation.

China successfully amended its constitution in a rush but created an abnormal constitution that goes against the progress of history. Korea is missing the perfect opportunity to draft a constitution that reflects the social changes of the past 30 years. History will hold both governments responsible for their constitutional amendments whether they were regressive as in China or did not happen at all as in Korea.