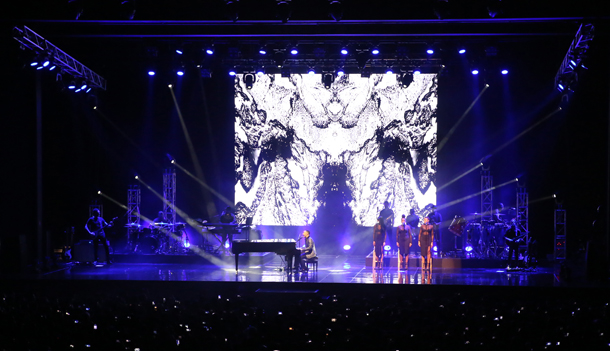 John Legend serenades his fans while playing the piano with his band. [AIM]

R&B and soul musician John Legend left fans overwhelmed with his two-hour concert in Korea Thursday evening at Olympic Park in eastern Seoul. If there was one word describing the ethos of the concert, it would be “love.”

The moment it was announced that the singer would come to Korea on his “Darkness and Light” tour, fans waited impatiently for tickets to go on sale. Within three minutes, 4,000 tickets were sold by concert organizer AIM.

Thursday evening, the performer showed up on stage promptly in a classy black shirt and greeted the crowd with a “hello” in Korean. He began the concert with “I Know Better,” the first track on his latest album “Darkness and Light.” In between some songs, he looked at couples in the audience and spoke about love saying, “We’ve got to appreciate every moment. Tomorrow’s not promised to anybody. Let’s love each other like we’re going to lose each other.”

He sang “You & I (Nobody in the World),” which is a song dedicated to his wife, model Chrissy Teigen. The screen displayed a video montage of his wife and daughter Luna. He shared with fans a story about how he helped his wife get through labor by playing upbeat songs until Luna was born. He said, “Finally around 4 p.m. Luna comes out to the world. I’ll never forget that moment. I’ll never forget the song that was playing.” It was “Superfly” by Curtis Mayfield. He followed with a performance of that song. 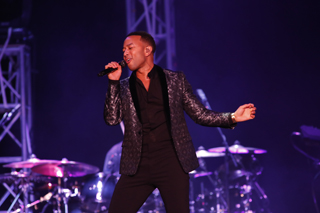 John Legend sings his heart out for Korean fans at his “Darkness and Light” concert in Seoul. [AIM]

In between the first and second halves of the show, the singer left the stage to change into a new outfit and his band members filled the stage with music. Each of the musicians in the band took a solo, from the saxophone player to the bass player, allowing the audience a taste of their individual talents.

Legend performed all of the Korean fan favorites like “Start a Fire” from the movie  “La La Land,” the title song from the film “Beauty and the Beast,” “Ordinary People” and even a few covers including Sam Smith’s “Lay Me Down.” The singer performed the song a cappella, which mesmerized the audience.

In the second half of the show, the artist moved the crowd with the song “Wake Up Everybody” by Harold Melvin and the Blue Notes. The song is about being awakened to the racism and inequality in society today. As he sang the song, the screen behind him showed Martin Luther King Jr. giving a speech about freedom, along with videos of protestors marching against racial discrimination.

With this performance, there was no doubt that the singer has a fierce love for his family, music, values in life and also his fans. He finished the show with an encore of “Glory” and “All of Me” which is an all-time favorite among Korean fans. He did not forget to say a big “thank you” in Korean, to which fans responded with howls and cheers.