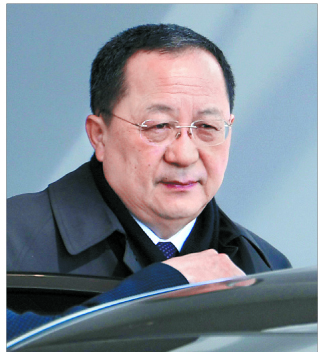 North Korean Foreign Minister Ri Yong-ho arrived in Stockholm on Thursday for talks with his Swedish counterpart likely to set the groundwork for the summit between U.S. President Donald Trump and North Korean leader Kim Jong-un.

Ri was scheduled to talk with Swedish Foreign Minister Margot Wallstrom Thursday and Friday, according to both countries’ foreign ministries, one week after Trump accepted an invitation by Kim to talks, announcing plans to hold a summit by May.

Sweden has been mentioned as a possible third-country location for the first U.S-North Korea summit, which is being arranged at a time of significant tumult in the White House after Secretary of State Rex Tillerson was fired and National Security Adviser H.R. McMaster was reported to be on the way out too.

“The talks will focus on Sweden’s consular responsibilities as a protecting power for the United States, Canada and Australia,” Sweden’s Foreign Ministry said in a statement Thursday. “They will also address the security situation on the Korean Peninsula, which is high on the Security Council agenda.”

As Washington does not have diplomatic ties with Pyongyang, Sweden has represented the United States in North Korea and has often played an intermediary role between the two countries.

Sweden is currently a non-permanent member of the United Nations Security Council.

The ministry pointed out that the UN Security Council has unanimously condemned North Korea’s nuclear weapons and missile programs and demanded their complete, verifiable and irrevocable elimination.

It added that the council has also “emphasized the need for intensified diplomatic efforts to find a peaceful solution to the conflict” and underscored that the “aim of the visit is to contribute to the effective implementation of the resolutions.”

The ministry said it plans to release a statement on the talks after they are concluded.

The North’s official Korean Central News Agency (KCNA) reported that during the visit, Ri and his team will meet with Swedish Foreign Minister Wallstrom “to exchange views on the bilateral relations and issues of mutual concern.”

The foreign minister’s father, Ri Myong-je was close to former leader Kim Jong-il and served as a deputy director of the North’s Organization and Guidance Department, which oversees the appointment of key management positions, and also as an editor at the state-run KCNA.

Foreign Minister Ri, who took his post in May 2016, is fluent in English and previously served as North Korean ambassador to London. He is believed to have the full trust of Kim Jong-un, and has been involved in negotiations with the United States since the 1990s and is the North’s top envoy to the defunct six-party talks on denuclearization. Ri served as a secretary in the North Korean Embassy in Sweden in the 1980s.

Choe is also a veteran diplomat who participated in nuclear negotiations since the 1994 talks between Pyongyang and Washington in Geneva and was a part of a high-level North Korean delegation to South Korea for the PyeongChang Winter Olympics last month from Feb. 25 to 28.

Ri’s delegation arrived at Stockholm Arlanda Airport around 6 p.m. Thursday and headed to the North Korean Embassy. They arrived at Sweden’s Foreign Ministry for a dinner meeting around 8:20 p.m., which lasted till 11 p.m. The two sides resumed talks Friday.

Ri initially planned to head back to Pyongyang Friday, but it was reported his return was delayed to Sunday, further indicating that his trip was to set the groundwork for a U.S.-North Korea summit.

According to Swedish broadcaster SVT, the Stockholm International Peace Research Institute (Sipri) will sit in on the meetings with Ri’s delegation to analyze the North’s intentions to dismantle its nuclear weapons program. SVT reported that the release of three Americans detained by North Korea ahead of a U.S.-North Korea summit would be a good confidence-building measure.

“If it is the case that the main players want Sweden to play a role, to facilitate, to be a forum or a link or whatever else, we are prepared to do that,” Swedish Prime Minister Stefan Lofven told Sweden’s TT news agency on Thursday. Lofven pointed out that Sweden is not militarily aligned and has had a long-standing presence in North Korea, but added that the main players had to “decide which role Sweden will play.”

Last week, Lofven held a summit with Trump in Washington, where the North Korea issue was discussed.

In a joint press conference with Lofven on March 6 at the White House, Trump thanked Sweden for helping with the issue of Americans detained in North Korea, especially for its role in the release of Otto Warmbier, the imprisoned U.S. student who died shortly after his release from North Korea last year.

“Sweden has somewhat of a relationship with North Korea,” Trump said, during the press conference, which came two days ahead of him accepting an invitation by Kim Jong-un to a summit. “We’ve been working with North Korea.”

“We have to find a dialogue,” Lofven said. “So the key actors are obviously the two countries, South and North Korea, as well as the United States and other big countries … We’ve said that we can provide — we can be a channel or do whatever we can to see that the dialogue is smooth.”

Sweden has maintained an embassy in Pyongyang since 1973.

“So with that relation with North Korea, I believe that they trust us,” Lofven said at the White House, adding if the key actors made a decision, “we’ll be there.”

Lee Eugene, a spokesperson for the South Korean Ministry of Unification, said in a briefing Friday on Ri’s visit to Stockholm, “The Swedish Foreign Ministry said that during the visit, they will concentrate on consular issues,” adding that “the key agenda of their talks is an issue between the involved nations, so it is not our position to explain about it.”