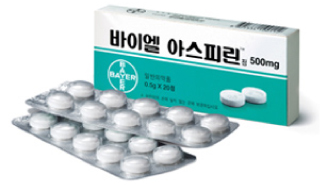 Bayer’s 500-milligram aspirin tablets, which were supposed to return to Korean shelves this month at the earliest, won’t be sold here until latter half of this year due to a supply shortage, according to the German pharmaceutical company on Monday.

Sales of the anti-inflammatory drug, which is used to reduce fever and relieve mild to moderate pain, came to a halt in December 2016 in Korea when Bayer Korea recalled the drug in its specific 500-milligram dosage after discovering their dissolution rate fell short of the standard set by the Korea Food and Drug Administration. The recalled amount was 57,000 boxes, which contained 20 tablets each. The recall had nothing to do with the safety of the drug and was meant to maintain quality standards, a Bayer spokeswoman noted.

Ever since then, the inventory of Bayer Aspirin that the company failed to retrieve has sold out and the 500-milligram Aspirin has been nowhere to be found in Korea for over a year, despite clear demand for the product.

“The plan to resume sales of 500-milligram aspirin in Korea hit a glitch after the production facility for the drug recently relocated from Indonesia to Germany,” said the spokeswoman. “We are still in the middle of setup and will restart imports as soon as possible.”

The 100-milligram Aspirin Protect tablets, however, remain available on pharmacy shelves. They are mostly used to prevent blood clots among the elderly.