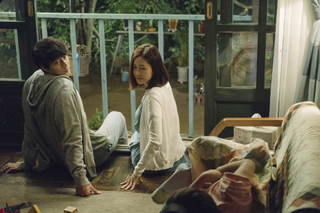 “Be With You” dominated Korea’s weekend box office in its first weekend, knocking off last weekend’s highest-grossing film, “The Vanished.” [LOTTE ENTERTAINMENT]

The romance movie “Be With You,” starring So Ji-sub and Son Ye-jin, knocked thriller “The Vanished” out of the top spot to dominate Korea’s box office over the weekend. Other anticipated new releases like disaster film “The Hurricane Heist,” webtoon-based romance thriller “Cheese in the Trap” and the award-winning crime drama “Three Billboards Outside Ebbing, Missouri” debuted within the top ten.

Over three days, “Be With You” sold 683,000 tickets at 1,162 screens, accounting for 44.6 percent of the weekend’s entire ticket sales. The adaptation of a Japanese novel, which was also adapted to film in Japan, has sold a total of 880,000 admissions since its release on Wednesday. Revolving around a bereaved husband and son, the story unfolds as their wife and mother comes back to life during the monsoon season. Though the Korean remake sticks with the original tale, it avoids being overly emotional by adding in elements of comedy.

Thriller “The Vanished,” about a search for a missing body, and drama “Little Forest,” about a mentally exhausted 20-something who heads back to her rural hometown after years of living in the capital city, took the second and third place spots with 252,000 and 127,000 tickets sold. By its second weekend, “The Vanished,” which is a remake of the Spanish film “The Body,” has sold a total of 1.11 million tickets while “Little Forest,” adapted from a Japanese cartoon-turned-movie, has sold a total of 1.35 million admissions in three weeks.

“Hurricane Heist,” revolving around thieves attempting a massive heist at the U.S. Treasury as a hurricane approaches, came in at fourth while “Cheese in the Trap,” which had to release an apology last week for being exclusively shown at CGV theaters, rounded out the top five. Adapted from a webtoon, the film is about the budding love of a university couple.

“Three Billboards,” for which its star Frances McDormand won the Best Actress Award at the 2018 Oscars, debuted in seventh place. The film, revolving around a mother who puts up billboards to resolve the case of her missing daughter, also stars Sam Rockwell, who took home the Oscar for Best Supporting Actor.