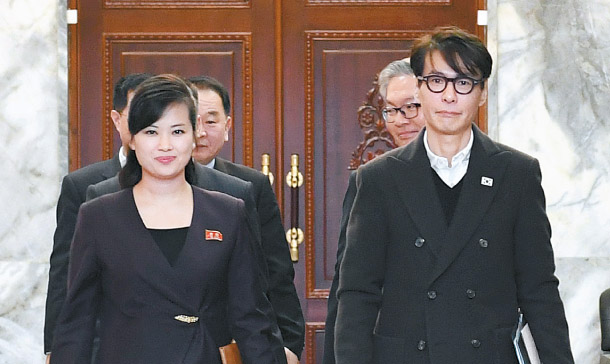 Lee Yoon-sang, right, a South Korean singer-songwriter and record producer, arrives at Tongilgak, a North Korean-controlled building near the inter-Korean border, on Tuesday for discussions with North Korean officials on a concert in Pyongyang next month. At left is Hyon Song-wol, leader of North Korea’s Samjiyon Orchestra. [MINISTRY OF UNIFICATION]

Red Velvet, a girl group known for its eclectic K-pop stylings, will be one of several music artists performing in North Korea next month ahead of a summit meeting between South Korean President Moon Jae-in and North Korean leader Kim Jong-un.

A group of 160 South Koreans, including musicians, support staff and reporters, will stay in the North Korean capital from March 31 to April 3 to cover a concert at the East Pyongyang Grand Theatre and the Ryugyong Jong Ju Yong Gymnasium. The gym was named after Hyundai Motor founder Chung Ju-yung, who financed the building’s construction to strengthen inter-Korean ties.

The exact concert dates have not been determined yet, the ministry said. The two sides discussed logistics for the concerts, including the location and line-up, during a working-level meeting at Tongilgak, a North Korean-controlled building in Panmunjom which straddles the inter-Korean border, on Tuesday. The three-person South Korean group included a senior official from the Unification Ministry, an official from the Blue House and Lee Yoon-sang, a singer-songwriter and record producer who will direct the concerts.

In addition to Red Velvet, the line-up will include Seohyun, a member of the K-pop group Girls’ Generation; YB, a five-member rock band; female solo artists Baek Z Young, Jung-in and Ali; and legendary singers Cho Yong-pil, Lee Sun-hee and Choi Jin-hee, who rose to the peak of their fame during the 1980s and ’90s. One or two artists might be added, the ministry said, depending on further discussions with the North. “I think the most important task for us will be to induce the North Korean audience to be moved just as the people here do and not to arouse any awkwardness,” Lee, the producer, said.

It wasn’t easy discussing the playlist with the North Korean group, Lee said, because “apart from anything political,” they didn’t know many of the songs. A final line-up will be compiled after further discussion with the North, he said. According to the ministry, the North promised to guarantee the delegation’s safety and convenience, and a separate team of South Korean inspectors will visit Pyongyang from Thursday to Saturday to check facilities in advance.

Pyongyang suggested the delegation, which will likely travel by plane, stay at the Koryo Hotel, which Seoul was reviewing. The audience for both performances will be selected by North Korean authorities. Other matters, such as whether or not to include a joint performance between South and North Korean artists, will be discussed via fax through a hotline at Panmunjom.

Lee, who goes by the stage name Yoon Sang, was the first South Korean celebrity to be tapped as a delegate for an inter-Korean meeting. The North Korean negotiators were led by Hyon Song-wol, leader of the Samjiyon Orchestra, which held two concerts in South Korea last month to mark the opening ceremony of the PyeongChang Winter Olympics. The agreement on a concert was reached during a meeting between the five special envoys of President Moon and Kim Jong-un in Pyongyang early March. The delegation was returning a visit made by the leader’s sister, Kim Yo-jong, to Seoul in February, where she delivered an invitation to Moon on behalf of her brother for an inter-Korean summit.

Both sides also agreed to have South Korean taekwondo athletes hold a demonstration in Pyongyang, though details have yet to be announced.